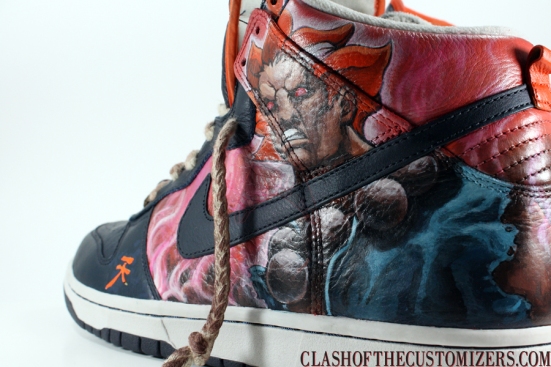 These are some highly custom Nike Dunks created by the folks at Diversitile. They created this shoe for the Clash of the Customizers in 2009.

The shoe was created for the clash of the customizes battle that taking place on sole collector right now. The Dunk is inspired by Akuma, we wanted to show the overall determination and mysteriousness of Akuma himself. The Akuma symbol is a repeating feature which means “sky”. As far as colors, we wanted to show the deep oranges and browns of a far away training ground, and pinks of Akuma’s evil energy. The art on the shoes are composed in a continuous scene around the shoes. The shoe laces and lace locks are accents of the Akuma character. We also incorporated our logo with the Akuma symbol to create a Japanese inspired scroll on each tongue.