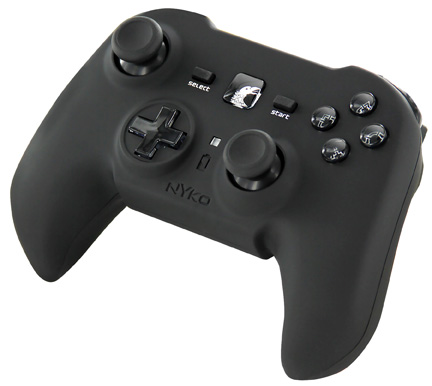 For those of you who really dislike the layout of Sony’s Dualshock 3 controllers for the PlayStation 3, Nyko has an alternative for you. Today, their new Raven controller is hitting stores and this one promises both comfort and an alternative layout. The Raven is larger than the standard PS3 controller and you can get it in a layout that is very similar to the Xbox 360 controller layout. I for one find the original PS3 controllers too small and don’t like the the placement of the left thumbstick on the controller. I prefer my Xbox 360 controller over the PS3 one so I might have to check out the Raven to see if it is as comfortable as the 360 one or not. The Raven is retailing now for $34.99.

Leading game peripherals manufacturer Nyko Technologies® today announced that its new premium PlayStation®3 controller, the Raven, is now available in select retail outlets, including Amazon.com and GameStop. With an MSRP of $34.99, the Raven features a Soft Feel Surface for superior grip, a built-in rechargeable Lithium-ion battery that lasts up to 25 hours, and full vibration support.

“We wanted the Raven to be the most comfortable controller possible, so we turned directly to PlayStation owners for their feedback,” said Nyko’s director of marketing, Chris Arbogast. “The innovations present in the Raven’s design are the result of combining their feedback with our 11 years of experience building quality peripherals for gamers worldwide.”

The Raven is available in two configurations. The Raven Standard configuration is laid out with symmetrical analog stick placement similar to the DualShock™3. The Raven Alternate configuration swaps the position of the left analog stick and directional pad. This gives gamers an ergonomic alternative to Sony’s layout and is a great option for players seeking a more comfortable controller for gaming sessions. New to the design of both controllers is the ability to swap the assignments of the bumper (L1/R1) and trigger (L2/R2) buttons, allowing the user to customize their gameplay experience and take advantage of the Raven’s improved ergonomic triggers.