This is going to be a really short review for a really mindless game that my kids and I discovered at the AT&T store, loaded up on one of their demo tablets. The game is called Wrestle Funny and it’s one of the weirdest interpretations of wrestling I’ve ever seen.

Wrestle Funny is a simple game in which two wrestlers are conjoined and the first of them to hit their head loses. It’s so simple that even my 5 year old can play no problem. In fact, I watched her and another little girl at the store go at it as if they had been played this game before, which was not the case. Wrestle Funny is easy to pick up and learn because there’s only one button you have to press. This button makes your wrestler kick his legs making both wrestlers spin around like crazy.

The game includes both single player and two player modes, but it’s the two player mode that is the most fun. Watching two people feverishly tap the screen while yelling at each other is a joy to see. While the game isn’t exactly what I call skill based as most of it in my opinion seems like luck, it’s still a fun little game to play for some giggles.

The only thing I’d call a negative though is the amount of crazy ads that pop up. The ads pop up at the beginning of a game, middle of a game, and at the end. That’s just too many ads. If you can deal with the ads, its a good game, but the developer should really think about toning it down.

Other than that, it’s a fun little game you can play with your kids. 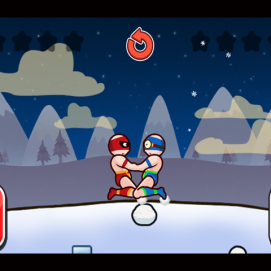 This is an amazing and funny game, you will win once you could make your opponent’s head hit the ground, or you will lose.

You could drive your legs by clicking the button on the screen. The funny point of the game is that people could rollover in the air hand in hand, and try to catch the chance to make you oppeonent hit the obstacle.Play as a wrestler. jump and make a funny joke .

What are you waiting for? Come and join the funny game quickly!