TeachMe: Kindergarten by 24×7 digital LLC is another game I picked up for my son for its educational purposes. TeachMe: Kindergarten is an educational game that focuses on the subjects of sight words, addition, subtraction and spelling. These are subjects that are very important for developing young children and will be very important later on as they grow.

At first, I thought maybe this game would be too advanced for him because it deals with subjects that are still pretty advanced for him such as addition and subtraction or the fact that he does not really know how to read yet. I’ve gone over some of these subjects before hand with him but really not as in-depth as TeachMe: Kindergarten would get so I didn’t know how he would react to playing this. He is only 4 years old and in Pre-K so I figured I might give this app a try and see if it would accelerate some of his learning and supplement that which he is also learning in school. The app itself is only $0.99 so it’s not priced in a way where I might regret buying it if it was too hard. In fact, at $0.99, it doesn’t hurt to try.

First off, TeachMe: Kindergarten is a straight up learning experience. There are no fun voices or whimsical sounds. This game was created with the sole purpose of teaching your child specific subjects. When they start the game, they are greeted with a chart that shows each subject and the current level they are at. As players progress, the questions asked get harder and harder. Like I said, I was a little worried at first that my son might not like this game because it really isn’t a game. The female voice used it very friendly but also very serious. Each question comes up almost like a flash card or a worksheet that they might do in school so because of this, I thought maybe he wouldn’t play it. I was wrong. 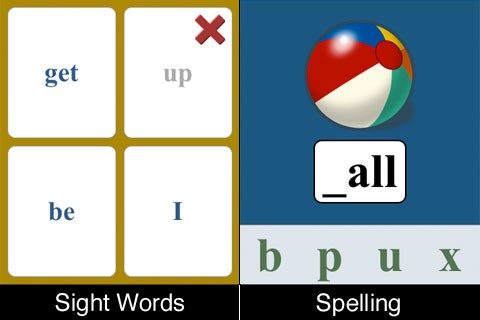 At the time of writing this review, my son plays this game continuously. He will play for about 30-45 minutes then take a break by playing something else for a few minutes, but then he always comes back to TeachMe: Kindergarten. I had to know why.

TeachMe: Kindergarten has a reward based system based on coins and rewards. For every few questions that my son gets correct, he is awarded a gold coin. If he saves up enough gold coins, he can purchase items for his aquarium. This includes fish, gravel, decorations, food, etc. So basically, my son has been playing Teach Me Kindergarten so that he can fill and decorate his aquarium with every item available for purchase. Not a bad way to get a child motivated to play.

My son has been playing the game for 2 weeks and I have to say that I see results. There is definitely improvement in the 4 subjects this game deals with. His addition and subtraction skills are much improved even though he has no learned any of that in pre-school yet. He can do some pretty basic addition and subtraction which is wonderful for someone of his age. As for sight words and spelling, he is also starting to recognize a lot of words now and what letters certain words begin with by sounding them out. I am very impressed with how much he has learned in such a short amount of time using this app. This is probably the best educational app I have purchased thus far for my son and well worth the $0.99 price tag.

TeachMe: Kindergarten is an educational iPhone app which teaches four different age appropriate subjects to Kindergarten aged children: sight words, addition, subtraction and spelling. Parents can select which subjects they want, set different difficulty levels, and even choose specific questions. Parents can review performance history for each subject to check how their child is doing.

TeachMe: Kindergarten keeps children engaged with a rather unique reward system where children earn a coin for every three correct answers. Coins can then be used to purchase stickers to place in fun sticker scenes or to purchase items for the new virtual aquarium (new in v2.1). Sticker scenes can be exported as wallpaper or emailed to family and friends.

The simple and intuitive user interface is designed to be child friendly, which allows children to play without help from an adult. An animated teacher (Mimi Mouse) gives verbal instructions and feedback to the child which makes learning fun.

FEATURES:
• Virtual Aquarium reward (4 types of fish and 25+ items)
• 5 different sticker reward scenes: farm, beach, underwater reef, pirate cove, city
• Over 100 different stickers for adding to scenes
• Save learning information for up to four children
• Select which subjects are displayed for each child
• Turn on/off specific questions within a subject
• Change the number of correct questions to earn a reward
• Change the number of questions in a row to mark a question learned
• Tracks performance for each subject item (last five)
• Export sticker rewards scenes to Photos, for emailing or using as wallpaper

LEARNING SUBJECTS:
• Sight Words: Dolch (Pre-K), Dolch (K)
• Addition: up to a total of 10
• Subtraction: from 10 down
• Spelling: complete words by choosing the first letter