Eyedip today announced that that their popular Flight Doodle game has been updated to version 4.50 which now includes a special Halloween Edition theme to play on. The new theme lets players experience a darker side of Flight Doodle filled with your traditional Halloween themed objects like ghosts, witches, pumpkins and bats. It’s still your job to avoid all these in hops of gaining the highest score on the leaderboards. 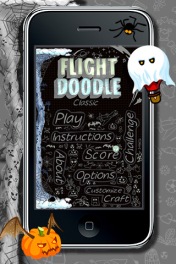 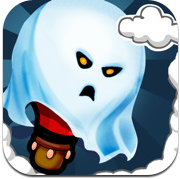 Fresh From The Pumpkin Patch; Halloween Edition of Flight Doodle Takes to the Evening Sky On iPhone and iPad Balloon costume contest will give away iPod touches (4G), Gift Cards and an in-game feature for the winner

New York, NY — October 12, 2010 — Eyedip, LLC conjures up a bewitching Halloween update for Flight Doodle and Flight Doodle HD. Now, under the cloak of night, the jack-o’-lantern balloon takes players on a new spooky Halloween adventure through the stormy night sky! Instead of cargo-dropping planes and rock-tossing pygmies, players take flight with ghosts, ghouls and zombies just in time for the scariest holiday of the year! To celebrate the season, Eyedip is also announcing a wicked “Balloon Costume Contest” which kicks off today. Prizes include three iPod touches (4G), hundreds of dollars in gift cards and an in-game feature for the winners. Trick or treat!

The Halloween edition brings a playfully sinister feel to this lighthearted hot-air balloon game. Attempting to reach extreme heights, players use tilt controls to avoid varied enemies like rock-throwing zombies, pitchforks and falling black and orange tacks. They even collect tools and power-ups dropped by a broomstick-riding witch. The new Halloween-themed doodles and graphics will send players floating over graveyards, haunted woods and creepy abandoned cabins.

“We love Halloween and like to think of this edition of Flight Doodle as an interactive haunted house in the sky,” says Jeremy Adelman, Co-Founder of Eyedip. “With the ‘Balloon Costume Contest,’ we want our loyal fans to claim this app as their own by giving them a stage to show off their Halloween-themed crafts. While the contest is running, we’ll be hosting the top costume in the app every day, and the winning balloons will be permanently added to the game!”

Along with a new icon and festive doodles, the menus have faded to a fearsome black and the in-game backgrounds have changed to reflect new spooky scenes. All in all, the Halloween Edition of Flight Doodle takes players to a new haunted realm in this marvelously crafted and thrilling update. Details on the Balloon Costume Contest can be found on Flight Doodle’s Facebook page and an all new website hosts players’ creations live as they submit their scores.