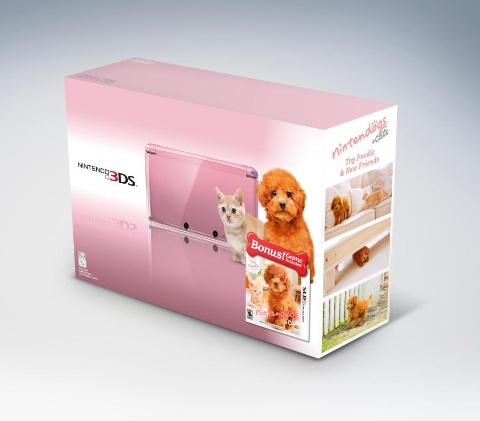 Nintendo will be releasing a new Pink Nintendo 3DS bundle starting December 4th that will include a copy of Nintendogs + Cats. There will be two different versions of the bundle but each will come with the same Pink 3DS. The price of each bundle is $169.99 which is the same price as the standard 3DS. It’s not a bad deal for a limited edition color and free game. Obviously this bundle is strictly for the girls.

For full press release, click the read more link below.

REDMOND, Wash.–(BUSINESS WIRE)– Nintendo has a number of video game value bundles on the market already. In the spirit of the start of the holiday shopping season, it seems like a good time to introduce a few more.

On Dec. 4, Nintendo will launch new bundles featuring a pink Nintendo 3DS™ portable system and either the nintendogs™ + cats: French Bulldog and New Friends or nintendogs + cats: Toy Poodle and New Friends software. The limited-edition bundles will be available at a suggested retail price of $169.99 in the U.S. – the same price as the standard Nintendo 3DS system.

These new bundles join the already-extensive list of impressive limited-edition bundles that are now available. Each one is sure to find a recipient on everyone’s shopping list: