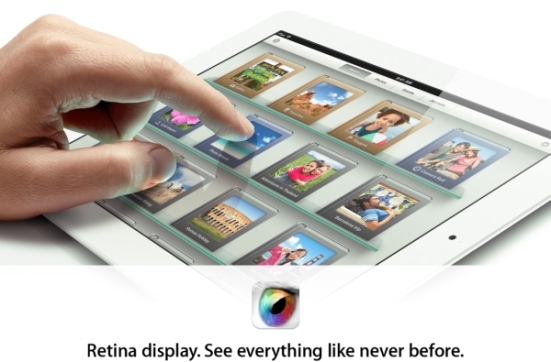 This is going to be a quick post on what was shown at Apple’s iPad event today. Basically I’ll just summarize the main points of what make this new iPad better than the iPad 2, and yes, I called it the new iPad because that is what Apple is calling it. No more number scheme on this one. it’s just called the new iPad.

Here’s what is known so far. It will have a Quad-core A5X graphics chip that will handle all the processing duties. No idea how much RAM it has though. The screen has also been updated and features a  new Retina Display with a whopping 2048-by-1536 resolution, 44 percent greater color saturation, and an astounding 3.1 million pixels — in the same 9.7-inch space. This beats out every tablet out on the market right now.  This is huge because looking at the iPad screen will be almost like looking at a photo. You will not see any pixels at all similar to what we get on the iPhone 4/4S.

In order to create a display with four times the pixels, we had to design it in a completely new way. You see, every pixel in a display has multiple signals telling it when to light up. But when you have a lot of pixels and a lot of signals on the same plane, signals get crossed and image quality suffers. To make sure everything on the new iPad looks crystal clear, Apple engineers elevated the pixels onto a different plane — separating them from the signals. It’s technology that’s breakthrough. Just like the new iPad itself.

The new iPad also features a brand new 5mp iSight rear camera that is borrowed from the iPhone 4S. This isn’t quite as important to me as I have an iPad 2 and I can honestly say I never use the camera on it. Some people might so it’s great that the new camera is much better than the crappy camera that came on the iPad 2.

The next new feature that many were asking for and that is now featured in the new iPad is support for 4G LTE networks [at&t & Verizon].

Price wise, the new iPad has the same pricing structure as the iPad 2 before it:

Now, Apple has also done something here that will really put a strain on their Android competitors. They will continue to also sell the iPad 2, but at a much lower price. It will only come in 2 flavors now, the WiFi 16GB for $399 and the WiFi + 3G 16gb for $529. This makes it almost impossible not to pass on an iPad based on price.