Warning: This game contains adult content so it should only be played by those 18+ unless you have the consent of an adult. This is mainly due to the graphic nature associated with zombie slaying, WW2 games, and Nazis!

This is something a bit different from me here on the site and that is reviewing a PC game. Yes, I’ve done a couple in the past, but most of those were for casual puzzle games. This however is a first person shooter which I used to only really play on Xbox or PS3. Yes I love my casual mobile and PC games but once in a while, I need to be an adult and play adult oriented games, mainly dealing with zombies. You see, I have a thing for zombie games and for some reason, I’m always drawn to them. Heck, I remember the when I first bought an Xbox 360, my first game on there was Dead Rising and that was an all out zombie hack and slash. There’s just something about a good zombie game that always grabs my attention.

With that said, one of my newest zombie hunting games I’ve started playing is Sniper Elite: Nazi Zombie Army on the PC. When I first came across this title, it reminded me of one of the best Nazi Zombie themed games out there, Call of Duty: World at War. Yes, CoD:WaW is an old game now, but in my opinion, it still one of the best CoD games out there and Nazi Zombie mode was one of the reasons why. My friends and I would spend hours playing that just to see how long we could survive. Anyways, back to Sniper Elite: Nazi Zombie Army, yes it’s going to draw comparisons to CoD:WaW, but it really is a completely different game and features much different gameplay so the comparisons are a bit unfair. It should be looked upon as its own entity from a fresh perspective. 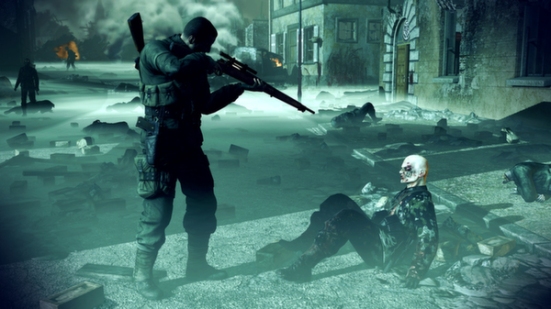 There really isn’t much in terms of story here. It’s towards the end of World War II and Hitler has summoned an entire Nazi zombie army to destroy mankind. This is basically his last ditch effort before succumbing to defeat. You are tasked with hunting them down and killing any that stand in your way. That’s pretty much it. There doesn’t seem to be a deep underlying plot or anything of that nature. Basically just pick your character, run through the level, and kill any and all zombies you see before they get your first. I don’t really mind however as the whole reason for picking up this title in the first place was to kill zombies.

If you’ve played other FPS games before, Sniper Elite: Nazi Zombie Army will be a cake walk to jump right into. It’s more run and gun really than it is sneaking around trying to be stealthy. Yes you can rely solely on your snipe rifle to pick off distant zombies, but once they start to over run your location, you’ll need to switch to a more close combat type weapon like the trusted shotgun or assault rifle.

I’ve never played any of the Sniper Elite games before, so I had no predefined idea of how this game should play or what to expect. I have however played other Nazi style zombie games before so I figured this might be more of that same, hectic, run and gun style of combat. What I can say is that if you’re looking for a stealthy style game, this isn’t it. For the most part, you’ll be using your sniper rifle to pick off distant enemies until they start getting closer to you. Then you’ll want to switch to an assault rifle or sub-machine gun because of the faster fire rate. You’ll probably also want to use the trusted shotgun and your pistol as a last resort.

Now, this game does not play like Nazi Zombie on CoD where you are thrown into a map and must see how long you can survive. Instead, this plays more like Left 4 Dead where you start at the beginning of a map and must make your way to the end of the map and into the safe houses. Along the way, you’ll encounter the Nazi zombie horde and must make sure they don’t over run you or it can make surviving quite difficult. The action can however get quite intense when they do all start coming up on you, especially if you are trapped in a room or corner and have no where to run. This makes for a very hectic game if you’re playing on your own. Good news however, you can play with friends.

Co-op fans will be happy to note that the game supports up to 4 players simultaneously. That means you don’t have to play alone. Playing with others ramps up the difficulty level and the game automatically adjust the number of enemies it throws at you. Obviously games of this type are much funner playing with others, though not necessary and can still be played on your own. But of course those who have played CoD and Left 4 Dead with others will want to find some friends to play with. Playing solo can get a bit lonely and repetitive while playing with others will liven things up.

Sniper Elite: Nazi Zombie Army is a fun little zombie shooter despite the fact that it may not be entirely what Sniper Elite fans are expecting. I for one could care less as I’ve never played any of the Sniper Elite games in the past so really have nothing to complain about. All I care about is the fact that this is a fun FPS for those who enjoy playing with friends and slaughtering hordes of the undead. Obviously with friends, you can actually try to play more like a sniper if you friends are more run and gun. You just hang back and pick them off while your friends cover you and take care of the zombies that might be rushing in on you. If you play on your own, you can still play as a sniper for at least a portion of the game but will have to switch up your play style to a more fast paced style of play. It’s not so bad however for those who like playing games like CoD or Left 4 Dead as those styles of play will prepare you for Sniper Elite: Nazi Zombie Army.

I actually quite enjoy the game even on my own. The main draw for me is the fact that I really like zombie games for some reason, even if they are bad, which thankfully this one isn’t. Gameplay seems pretty solid, graphics are great, and there is a good assortment of enemy types to kill.