If you take a look at the BlackBerry App World for radio apps, you’ll find that the selection in there isn’t really that impressive. It’s missing the really major apps like Pandora, Rdio, and Spotify, but that’s not to say there aren’t a couple gems in there. One of them is Songza, which is available on other platforms, but I didn’t know about it until seeing it in App World for the BlackBerry Z10. Anyways, after using it a few times, it now has a permanent spot on my device. What makes Songza different from Pandora is the fact that instead of you creating radio stations from artists and songs you know, its “Music Concierge” system delivers music based on what activity you may be doing or mood you’re in.

Songza makes choices based on a variety of factors. For one, it always knows what day it is and what time of the day it is. This allows Songza to offer specific categories based on this. What you do is choose a category based on what you are doing, then from there choose a sub category of genres. Once you do that, they’ll offer you 3 playlists that you can pick. These playlists consists of songs that are hand picked by their music experts and approximate what you most likely want to hear. Since it’s radio, you’ll end up listing to a lot of songs you know and a lot of songs you don’t know. That is one of the things I do love about these radio apps however and that is discovering new music.

Now you don’t have to browse this way if you don’t want to. You can easily hit the explore tab and browse through the usual list of categories and genres to find what you’re looking for. Like others, you’ll be able to rate songs as they play which in turn will make your personalized music selection more accurate in the future. What Songza does do that you can’t do on Pandora unless you pay is have unlimited song skips along with no limits on the amount of time you use it per month. It also seems like it doesn’t interrupt your music with ads, though the app does display banner ads. I don’t mind the banner ads as long as there are no radio ads interrupting my music.

Songza is a great alternative to other radio apps. The fact that it has no listening limits is a huge plus as well as it being free. It even allows you to save favorite playlists that you’ve heard and replay them back without having to go through category selection again. This app is strictly for music playback. It doesn’t offer the extras that Pandora does such as artist info or album info, but for straight up music, Songza is great.

The BlackBerry 10 version of that app is pretty much almost exactly like its iOS counterpart except for a slightly different user interface and doesn’t include the clock app or sleep timer like the iOS version. Other than that, everything else is very similar so if you’re a music lover, I would definitely give Songza a chance on your BlackBerry Z10. 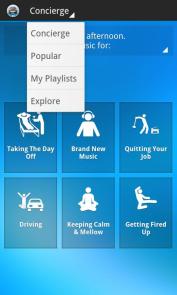 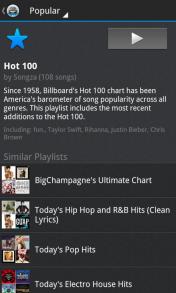 Leave a Reply to Apollo v1.0.2 for BlackBerry 10 Review – A Third Party Pandora Client | The Gamer With Kids Cancel reply