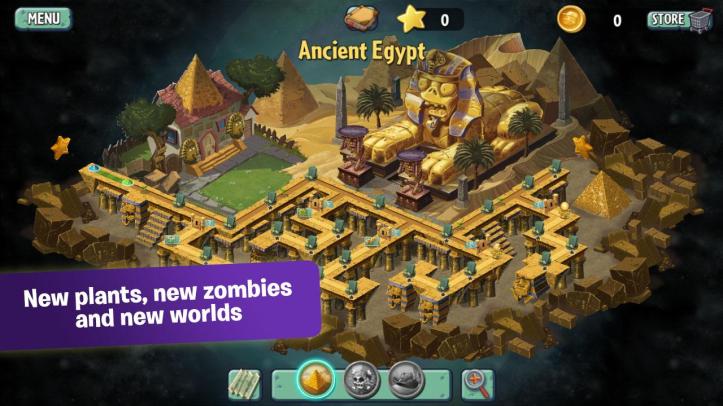 The long wait is over and fans of Plants vs Zombies on Android can finally download the sequel, Plants vs Zombies 2 on Google Play. The iOS version of the game was released a while ago but now Android users will be able to join in on the fun. PvZ2 is free to play this time around so everyone can play. It doesn’t quite show up in searches just yet on Google Play, but for US players, you can click on the direct link here to grab it: https://play.google.com/store/apps/details?id=com.ea.game.pvz2_na

SEATTLE, WA—October 24, 2013—PopCap Games, a division of Electronic Arts Inc. (NASDAQ: EA), today announced the global launch of Plants vs. Zombies™ 2 for Android™ devices.  Available worldwide via Google Play™, the game brings all of the great features from the mega-hit sequel to millions of new Android players around the globe.  Plants vs. Zombies 2 has already become a global mobile favorite with players of all ages, and the new Android adaptation of the game is the first PopCap title to feature full integration with Google Play Game Services.

“With the arrival of Plants vs. Zombies 2 on Android, we’re effectively reaching a huge new audience of mobile players who have been eagerly awaiting the game,” said Tony Leamer, Franchise Business Director for Plants vs. Zombies. “We’re particularly pleased that the Android iteration of the game has all the great features and functionality found in other mobile editions.”

Free to download and play, Plants vs. Zombies 2 features a time-travel theme that propels players through different historical eras to face off with zombies from various time periods.  The game was designed as an ever-expanding universe, offering regular content updates, including new worlds full of new plants, zombies and challenges beyond the first three found in the initial game release.  Plants vs. Zombies 2 extends the classic gameplay of the original and provides players with dozens of all-new levels, plants and zombies. While the vast majority of the game is entirely free to play (players can face every zombie and access every level in every world at no cost), Plants vs. Zombies 2 players can also purchase upgrades and other in-game items to enhance their gameplay.

In addition to exciting new locales to explore and discover, Plants vs. Zombies 2 includes a wide variety of gameplay enhancements, including Plant Food, which drops from glowing zombies and offers a temporary but powerful boost to your plant attacks. Plants vs. Zombies 2 also includes all-new gesture-based power-ups that enable players to interact with zombies directly, to augment their plant defenses.

Key features of Plants vs. Zombies 2 include:

•    More than 60 levels at launch, with dozens more coming in future worlds

•    Dozens of new plants and zombies, each with unique powers and behaviors

•    Side missions, mini-games and other brain-teasing challenges in every world

PopCap Games is the leading global developer, publisher and operator of casual video games: fun, easy-to-learn, captivating games that appeal to all ages across PC, mobile, social and other platforms. Based in Seattle, Washington, PopCap was founded in 2000, was acquired by Electronic Arts in 2011, and has offices in Seattle, San Francisco, and Shanghai.