Blowfish Meets Meteor is a new brick breaking puzzler from developer Sky Tyrannosaur. While most brick breakers don’t really have much of a story involved, this game is different as it seems to have one, even if it isn’t very deep. The main premise of the game and why you care about breaking bricks is that you are a father looking to save your mermaid daughters from giant sea monsters and bosses.

For the most part, the game plays like your standard brick breaker. You are at the bottom of the screen with a shell over your head that you use to bounce a fallen meteor back up at the bricks. Bricks have to be broken in order to make enough space for your mermaid daughter to escape. Like most brick breakers, you’ll also have chances to gain power ups that will increase your chances at winning. There is supposedly 10+ hours of content, but I haven’t quite gotten far enough to know if that is really true or not. There are a ton of levels though.

Graphically, the game looks very good with what the developers say are thousands of frames of hand drawn animations. That’s quite a feet and does give the game a more personal and unique look over something that is computer generated. All art is very colorful with tons of personality that will appeal to players of all ages. Audio in the game also very good with about 30+ minutes of original soundtrack.

I’ve played a lot of brick breakers and this one probably has the most character. It’s not just another generic game in the genre and it really seems like the developers went out of their way to create a fun experience for an already established genre. The game mechanics are solid and overall fun while I think the best aspect of it is the art style. Again, it gives the game lots of character over similar games and I think most people should have fun with this one. 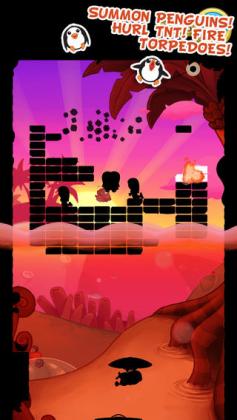 Block-breaking action like you’ve never seen it before! Rescue your mermaid daughters, slay gigantic sea monsters, and smash a few gajillion blocks while doing it in this stunning block-breaker-meets-puzzle-platformer hybrid.

Take an epic journey from the surface of the waves to the mysterious, alien trenches at the bottom of the ocean. New surprises lurk around every corner: you’ll summon fluffy penguins to aid you, flee zombified pirate ships, create makeshift platforms from the lingering ghosts of jellyfish, use gigantic laser beams to blow up entire levels, fight to escape from the belly of a vengeful whale, and more. At the end of it all, you’ll battle an unmatched evil and uncover the secrets of a mysterious underwater world.

Do you have what it takes to rescue your mermaid daughters? There’s only one way to find out! Let’s do this!

Note: This app is not compatible with iPhone models 3GS and lower.