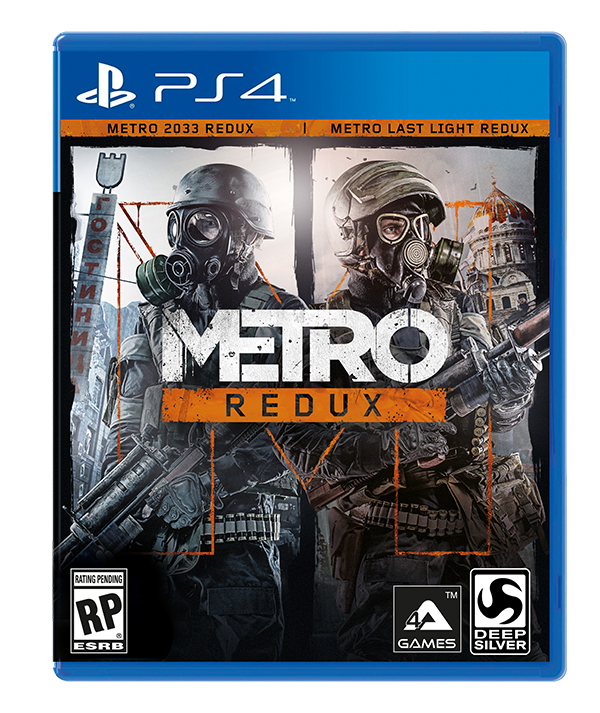 Today, 4A Games and Deep Silver announced that their award winning Metro series is making its way to PlayStation 4 in the form of a remaster combo pack that will include both Metro 2033 and Metro: Last Light. Metro Redux, if purchased in the retail package will include both Metro 2033 Redux and Metro: Last Light Redux. You’ll also be able to buy each separately on the PlayStation Network Store as a digital download for $24.99 each.

Metro Redux will feature never-seen-before content, new gamplay features, and updated visuals running at a smooth 60FPS. It will even include all previously released Season Pass add-on content. Look for both games later this summer. In the meantime, check out the official trailer and press release below.

Larkspur, Calif., May 22, 2014 – 4A Games and Deep Silver are bringing the iconic and award-winning Metro series to the next generation: Metro Redux features fully re-mastered and improved versions of both Metro 2033 and Metro: Last Light, creating the most compelling Metro experience ever. Upon release, Metro 2033 Redux and Metro: Last Light Redux will each be available separately as a digital download for Xbox One, the all-in-one games and entertainment system from Microsoft, PlayStation®4 computer entertainment system and PC for $24.99. Alongside the digital release, a boxed compilation containing both games, Metro Redux will be available at retail for a suggested $49.99.

With new, never-seen-before content and new gameplay features, as well as outstanding updated graphical fidelity and silky smooth 60FPS gameplay, Metro Redux is much more than a simple HD upgrade.
For the Redux edition, Metro 2033 has been completely overhauled:

· The original game has been rebuilt in the latest and greatest iteration of the 4A Engine, bringing all the graphical and gameplay improvements from Metro: Last Light to Metro 2033 Redux
· Experience radically improved gameplay: advanced enemy AI, improved combat and stealth mechanics, superior weapon handling and more responsive, intuitive controls plus signature features from Last Light such as the atmospheric mask wipe mechanic, weapon customization, and silent kills and takedowns
· Enjoy completely re-mastered visuals: advanced lighting, dynamic weather, more detailed characters with improved animation, more dynamic destruction and improved smoke, fire and particle effects
Metro: Last Light Redux has also received a graphical facelift and gameplay improvements that carry across both titles, including new melee animations, and the fan-requested Check Watch and Check Inventory features. It also includes all previously released Season Pass add-on content  a further 10 hours of single-player gameplay.
With Metro Redux, players now have the choice to experience both Metro games the way they want with the introduction of two unique Play Styles.

Those who favored the more survival horror oriented gameplay of Metro 2033 can play both campaigns in the Survival Play Style, a fraught slow-burn fight for survival with limited resources, deadlier enemy AI, and slower reload speeds. Those who enjoyed the more action oriented gameplay of Metro: Last Light can try the Spartan Play Style, providing Artyom with a powerful set of combat skills and more plentiful resources.

In addition, the legendary Ranger Mode returns to both games, providing the most immersive and challenging experience as the HUD is stripped away and hardcore rules apply.

Metro Redux is based on the internationally bestselling novel Metro 2033 by Dmitry Glukhovsky.