If you’ve been playing video games as long as I have, you’ve probably played almost every platforming game imaginable. These are games like Super Mario Bros, Sonic the Hedgehog, Rayman, etc. Most want you to get from point A to B and this usually involves some running, jumping, enemy bashing, and even a bit of exploration and puzzle solving. If you’ve played enough of these, not much is really going to surprise you anymore in the genre. So when one does surprise you, you take notice. Metrico by Digital Dreams is just such a surprise and is a platformer that is far different from anything you may have ever played. In fact, the concept is quite unique and unheard of, describing itself as an infographics action game. However it’s the gameplay itself and what you’ll be doing with your PS Vita that will have you really taking notice of just how different this game is.

When I first saw Metrico for the first time in screenshot form, I thought it was some kind of fitness tracking app for the PS Vita. My first reaction really was, “oh great. Why would the Vita need a fitness tracker?” Then I realized is was a game. Metrico was a game far different from anything I had seen before, as if someone had taken stats, entered them in an Excel spreadsheet, and then turned it into a playable game. It’s a game filled with percentages, pie charts, statistics, and bar graphs but somehow makes all this boring data fun. 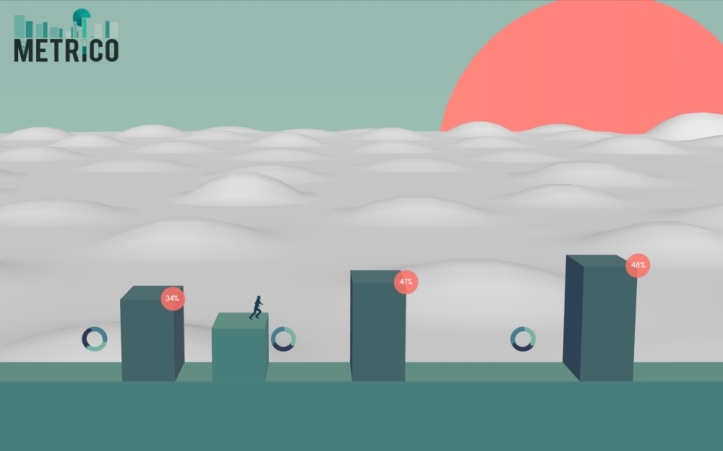 First, the graphics for Metrico are what we would call very minimalistic, despite the game being rendered in 3D. It uses nothing but solid colors for most of the game and most of the elements are made up of simple blocks or lines. For instance,  your avatar is a faceless silhouette with the only forms of customization being that of choosing to play as a male or female character. This is really as minimalistic as you can get with a 3D game, but it all seems to work here as the main theme of the game is that of an infograph. If you’ve ever seen an infographic before, most of them look exactly like this. It really gives Metrico a very unique look and one that I’m betting you haven’t seen before in a game.

Accompanying the unique, infographics style art is a wonderfully produced soundtrack. It’s an upbeat soundtrack that uses a lot of digital produced sounds to form music. It’s not quick like techno. It’s more like soothing office music or something you’d hear at a spa to calm your nerves. It’s thinking music that never feels like it’s in your way or distracting you from your goal of solving the puzzles. There wasn’t ever a point where I thought, hey, let me just turn this down so I can listen to my own tunes. In that respect, it works very well.

Metrico is one of the few games that makes full use of everything the PS Vita has to offer. That means that many of the puzzles will require not only the use of the traditional controls (thumbsticks and buttons), but also the rear touch pad, front touchscreen, shoulder buttons, and the gyroscope / accelerometer. This can make the game a bit puzzling at times where you’re not entirely too sure what you are supposed to do because you don’t know what variables will change what. If something isn’t working for you, try a different approach.

For instance, there might be a block that you need to raise an “x” amount. In the last puzzle, it might have been jumping that changed this variable, but on this one, it isn’t. Sometimes it could be just dropping down from a ledge that sets it off or rotating your device to a certain angle that makes it move. Even walking backwards can affect it. It’s all different for each puzzle. The trick is to just try everything and to pay attention to what movements do what to pass each puzzle.

I’m not going to lie, some puzzles are pretty easy to figure out while others are real head scratchers. I’ve already come across a few that left me perplexed to the point where I had to just shut off my Vita and come back to it later with a fresh, relaxed state of mind. What I really like though is the feeling of accomplishment you get when you do finally figure a puzzle out, especially the really hard puzzles. There’s no greater feeling than being able to figure them out on your own.

I think though that what makes Metrico so challenging of a game is the fact that it makes such good use of all of the PS Vita’s features. Never have I played a game that required me to use all of these features at once and to use them in strange, but intriguing ways. The more interesting ones are the ones that require twisting and turning and rotating of your Vita in ways you never thought you would. It’s these unique gameplay elements that make Metrico so memorable and different.

If there was one negative I could find in the game, it would probably be the use of the rear touchpad. It’s not that the use of it bad, it’s just that it can be a tiny bit inaccurate and buggy. Sometimes it would not exactly aim where you want it to aim, or the guide lines for it would not show up. Also on the first gen PS Vita, it’s just too easy to accidentally have you fingers resting on it causing all kinda of shenanigans. I would say that this is probably more of a PS Vita fault than it really is a gameplay fault.

For me, Metrico is a very unique experience. What makes it so unique for me was not only the graphics itself and the unique gameplay of using things like statistics, charts, percentages, and other Excel like terms, but also because of the way the game went about having you solve these puzzles. Much of it required thinking out of the box in terms of traditional problem solving and although it required a lot of trial and error, solving each problem was met with a feeling of pride and fulfillment. Every time I solved a difficult problem, it was met with a, “hell yeah” on my end.

Don’t take my word for it as not everyone out there is going to like Metrico. It’s different and might not be to everyone’s taste, but what I will say is that I think it’s a game that everyone should at least play for themselves. These is so much you can get out of playing Metrico if you stick with it and though frustrations will be there, how’s that different from any other puzzle game? Not everyone will be able to solve all problems in one playthrough but if you stick to it,you’ll come out of it with a huge grin on your face.

Metrico is currently $13.99 exclusively on the PlayStation Store, but if you have a PS Plus account, you’ll be able to download it free during the month of August. I highly suggest that anyone who owns a PS Vita pick this title up and try it out for yourselves. It’s a uniquely challenging game that should be played first hand. 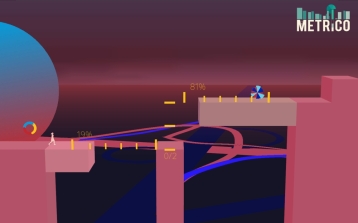 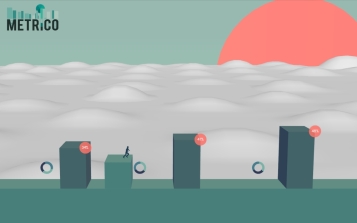 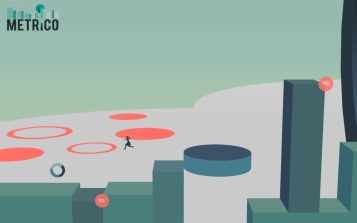