Bluetooth wireless speakers are a necessity these days especially if you love music and like to take it with you. I don’t like listening to my music through my smartphone speakers and though I like using headphones, you can’t share your music with others if you use them. I also dislike speakers that require a cable to use because I don’t like being tethered to it. I like being able to just place my speaker somewhere and move around as a I please while still being able to enjoy my tunes. That’s why Bluetooth wireless speakers will always have a place in my home and when I’m out enjoying the day with friends or family. I have a few wireless speakers that I use on a regular basis, and though they may all do pretty much the same thing, there’s always that one speaker that might do something a bit more than the last or that one surprise you weren’t expecting.

Take for example the new Jam Rewind. This is a rather compact wireless speaker doesn’t feature one, two, or even three speakers. It has four speakers built into it, which is incredible considering its size. Not only that, it looks pretty cool too with a retro design that resembles that of a cassette tape. Those are things old people used to buy that had music stored on them that you had to rewind manually if you wanted to listen to a song again.

Jam really thought things through with the Rewind when it comes to packaging this thing. When the Rewind arrived to me, it came in a box about the size of a box you would get a keyboard in. When I opened it, it was another box, but this time it was designed to look like an old school boom box (mainly just the design of a boom box printed on the outside). In the middle where the cassette tape would usually go sat the Jam Rewind in a plastic case that  resembled that of an old cassette tape case. Jam really went all out on the whole retro them. 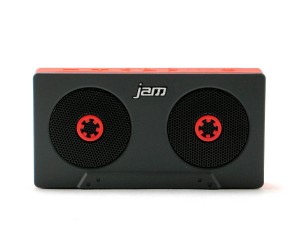 Removing the actual Jam  Rewind case, we find that this thing not only looks like a larger version of a cassette tape case, but it even opens like one too. Open it up and you can pop the “cassette” out. The Jam Rewind is larger than an actual cassette tape but does resemble one a bit thanks to its design.

The portion that looks like the tape inside the cassette are the speakers, two on each side of the Rewind. There are two audio drivers up front which power the highs and mids while the rear houses what seems like two tiny woofers for the bass. That’s pretty unique as I don’t see any wireless speakers of this size with woofers, let alone 4 speakers packed into such a thin casing.

The Jam Rewind isn’t all grey and black as there is a splash of color on the sides. In my case, there is a red silicon border that wraps all the way around the sides. I”m guessing this is for some shock protection a well as grip. On the top, there are soft buttons built in that let you control playback, volume, and power. It also has indicator LED’s to let you know when it is on and paired.

All of this combines to form a rather tidy package that is easily pocketable, light, and good looking.

One of the main features is that the Jam Rewind has 4-speakers. This makes for an incredibly loud setup despite its size. Again, two seem to be for highs and mids while the other two in the rear is for bass.

Of course the Rewind is wireless so you’ll be connecting it to your devices via Bluetooth. It is very easy to pair it with your devices and you’ll be up and running within seconds. If you have a device that isn’t Bluetooth, you can still use the Jam Rewind via the aux jack. If connected via Bluetooth, you’ll have full playback control of your music with dedicated playback buttons as well as dedicated volume controls.

Not only can you use the Jam Rewind for music, it can also be used as a speakerphone. This makes the Jam Rewind a full featured wireless speaker and one of the most versatile ones I’ve used of this size.

Last but not least, the Jam Wireless is one of the few wireless speakers that features voice prompts. It tells you when you are at max volume, if the speaker is paired or not, when you power down, and more. It makes using the Jam Rewind much easier as you know what is going on as opposed to beeps that could mean anything.

I will say that I’m actually very surprised with the Jam Rewind and the way it sounds. It is very loud for such a small setup and their us a surprisingly good amount of bass. This is probably due to the woofers in the rear which again, is something you don’t usually see in such a small package. But let me reiterate again just how loud this is. I was trying this out upstairs in my house and my son comes running in telling me that he can hear it all the way downstairs. That’s how loud it can get. What’s good too is that there is no audible distortion, so it’s neat you can run it that loud, I just normally wouldn’t.

Also next on my list of positives is just how small it is. Unlike many of my other speakers, I can actually fit this in my pocket. I can even throw it in my bag without any noticeable bulge. It’s just such an easy thing to carry because of its shape and size. It’s not like those tiny can shaped speakers that are good, but impossible to pocket and awkward to put in a bag.

Overall, I was very pleased with my entire experience with the Jam Remind. It sounds great, looks great, and its small size makes it easy to carry. I also like the fact that it comes with a case that you can optionally use if you want to protect the look of your Jam Rewind.

I like the Jam Rewind a lot. This speaker has so much packed into it, it’s almost hard to believe because it is so small. It’s not only a Bluetooth speaker for your music, it’s also a speakerphone for hands free calling. While some larger speakers only have basic playback controls, the Jam Rewind includes full playback controls allowing for play/pause and track seeking. It even has dedicated volume controls as well.

This is a full featured wireless speaker with many, if not all the features you want in a wireless speaker. You don’t have to make any sacrifices with the Jam Rewind which you sometimes have to do with others. The Jam Rewind is now at the top of my list when it comes to features, portability, and sound.

This review is made possible with my affiliation with G Style Magazine. It is also featured at the G Style Magazine website which is a tech blog that focuses on the fashion aspect of tech. Please visit their site for more awesome gadget reviews.