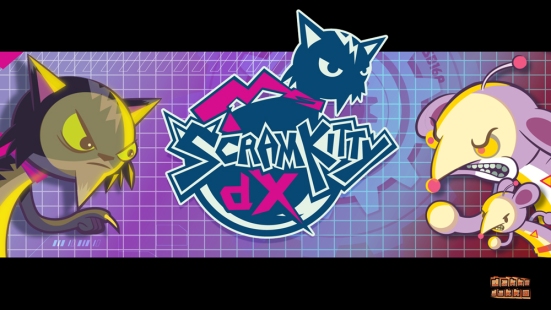 If you haven’t checked out our review for Scram Kitty DX, you can check that out here. For those who have played the game, you might be happy to note that the developer isn’t done with this game yet. A year after release, Dakko Dakko has decided to enhance the game with a new ‘Twin Stick’ control scheme. While the game was fun before, the new control setup allows you to better manage enemies by now allowing you  to aim at them even if they are not directly in your line of site. This changes the gameplay quite a bit.

If you haven’t played it in a while, it might be a good time to revisit the game. Updates are hitting Scram Kitty today on the WiiU, PS4, ,and PS Vita.

Cardiff, Wales – May 15th, 2015 – You can’t teach an old dog new tricks, but they don’t say any such thing about cats and so to mark a year since the game’s debut, Dakko Dakko is giving their hit shoot-em-up Scram Kitty a revolutionary update!

Scram Kitty burst onto the Wii U eShop to high praise last year, with Eurogamer describing the platforming/shooting hybrid as “a wonderfully idiosyncratic creation that feels like nothing else”. Metro GameCentral welcomed it as “a fantastic new arcade game that takes plenty of inspiration from older classics but has just as many new ideas of its own” and Official Nintendo Magazine called it “incredibly satisfying”. The free anniversary update will begin rolling out today on all platforms and adds a new play style, allowing players to freely aim one direction whilst riding in another using a ‘twin-stick’ control setup.

Rhodri Broadbent, founder of Dakko Dakko, said “We’ve enjoyed great success with Scram Kitty this past year, and we decided to celebrate by releasing this update for all players of our game. New players will find the added ‘twin-stick’ controls make the unique gameplay much more approachable, whilst experienced cat-catchers will enjoy even more intense and kinetic gun-battles, with greater evasive freedom and re-balanced weaponry.“

Broadbent continued, “We know we’ve built up a base of expert players who relish our game’s challenge, so the original straight-shooting style controls remain in place, but I have no doubt that once the Scram Kitty masters get a taste of the added flourishes they can now pull off, they’ll find the new setup to be irresistible.”

Scram Kitty and his Buddy on Rails sees players glide along the colourfully glowing railings of a huge space station, leaping over countless hazards and blasting back hordes of deadly super-rodents in search of the stranded Scram Kitty. Alongside the newly added ‘twin-stick’ play style, this update brings freer movement when targeting, enhanced enemy AI, and many small adjustments throughout to make the whole game a smoother experience.

Scram Kitty and his Buddy on Rails is available to download for Wii U via the Nintendo eShop, and Scram Kitty DX is available for PS4 and PS Vita (Cross-buy) via the PlayStation®Store, priced $9.99/£7.99 (or local equivalent).