Environmental puzzle games have been around for a long time in various forms but none have been more well known in my opinion than Portal and the followup, Portal 2. Both were hugely successful because of how challenging the puzzles were as well as how deep and immersive the story and characters were. I haven’t played another game like those since, until I came across Q.U.B.E. Director’s Cut (aka Quick Understanding of Block Extrusion) by developer Toxic Games and publisher Gripgames.

This is one aspect of the game I really don’t want to tell you about as it something I think you really need to experience for yourself. The basic premise though is that you have awoken in a strange place armed with nothing but a pair of strange gloves that give you the power to manipulate certain aspects of the environment. Not knowing who you are or what you’re doing there, a strange voice contacts you informing you that you are on a priority mission to destroy this “Cube” and to save the Earth from it. 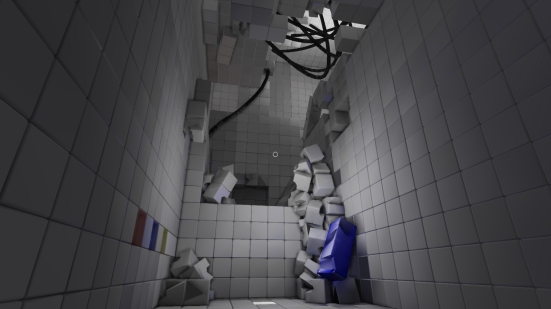 If you want to know the rest of the story, I highly suggest playing Q.U.B.E. Director’s Cut, otherwise you can check out my complete walkthrough of the game here.

Central to Q.U.B.E. is the gameplay and for those who have played any of the Portal games, you will enjoy this. While I wouldn’t say this game is as difficult as Portal was, the puzzles here are still quite challenging. There are some elements to the game that might be familiar, but I think the way Q.U.B.E. goes about things is pretty unique. Instead of a “gun,” you’re equipped with special gloves that can interact with  certain blocks around each puzzle.

As you progress through the game and the different sectors, you’re gloves will be able to interact with more and more block elements. The standard blocks are red, blue, green, and yellow and each has their own unique characteristics that you’ll have to be familiar with. Other elements will be introduced into the mix such as rotating parts of a room, robotic spheres you have to move to a specific location, and even directing light via prisms.

Aside from interacting with blocks, you can also jump, but gravity limits you to basically a block in both height and distance.

For a small taste of what the gameplay is like, check out my Sector 1 walkthrough above. This gives you the basic idea of what the blocks do as well as a tiny bit of what the story is about. I don’t really suggest going any farther than that with the videos if you don’t want any real spoilers.

Graphically, the game looks very good, but that’s to be expected from a game that mainly consists of large cubes. Much of the color pallet is is limited to shades white, black, and shades of grey with the only splash of color coming from the special blocks you need to interact with. Lighting also plays a huge part with the look and feel of the game and the developers make very good use of it here.

While the graphics are great, I think the one of the best parts of Q.U.B.E. Director’s Cut is the voice acting. I won’t spoil the story here, but the the voices you interact with throughout your journey really help convey the gravity of your situation. There are no real visual clues about what’s really going on with your situation so you must depend on these voices to guide you. The actors used are very good at what they do and are both very passionate with their performances to the point where it starts to affect you emotionally. Are you really doing good here or is there something else really going on?

I really liked Q.U.B.E. Director’s Cut. Many will compare it to the Portal games, but I think despite their similarities, Q.U.B.E. brings its own unique flare to the table. The use of colored blocks with different traits is interesting and though the early levels are a bit easy, the later levels make up for it in both difficulty and scope. They introduce a lot of elements later on that make the puzzles more intriguing with several puzzles that left me scratching my head in puzzlement.

What I really liked though was the story that they built around these puzzles. Without the story, these would just be a series of puzzles with no real context. The story really makes the game and helps push the gameplay forward. The more that is revealed to you, the deeper you want to dig into what is really going on. It makes you want to go further and further. I honestly believe that if the game came without the story element, I might not have played it all the way to the end.

With that said, I say definitely go check out Q.U.B.E. Director’s Cut.