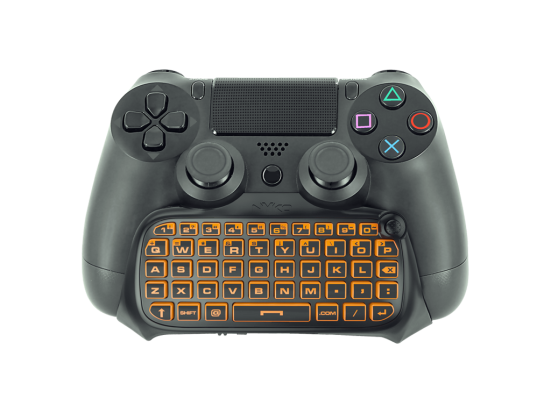 If you’re casual gamer that doesn’t do much online gaming or messaging, than the NYKO Type Pad is probably something you’ll never need. For the rest of us, it might be something you’ve always wanted, just didn’t know you did. The NYKO Type Pad is a Bluetooth keyboard attachment for the PS4 that connects to the DualShock 4 controller. It’s supposed to make typing much easier than with the onscreen virtual keyboard allowing you to message faster and fill out forms faster. So is the NYKO Type Pad worthy of your money? Read on and find out.

How Does it Look?

The NYKO Type Pad is basically a mini keyboard that attaches to the bottom of the DualShock 4 controller. It’s made of plastic similar to what is found on the DualShock 4 and even has some of the same texturing. This gives it a seemless look as if this was already part of the controller to begin with. The fit and finish however isn’t entirely perfect, but it’s close enough where it’s not an issue.

The Type Pad locks in via these little nubs on the side as well as via the headset jack on the controller. The Type Pad features a mic pass through so if you were using a headset that plugged into this jack, you’ll be able to plug it into the Type Pad and still keep all the same functionality.

The keys on the Type Pad are made of a bright orange, squishy rubber material accented with black print. The keyboard features a full 5-row QWERTY keyboard with several shortcut keys for specific characters. While it might look really nice, the feel of it is a bit off. I’ll explain more further down. On the top right corner of the keyboard is a little joystick nub for easily moving between letters in case you made a mistake while typing.

The NYKO Type Pad is charged via a USB port located on the bottom and connects to your PS4 using Bluetooth.

How Well Does it Work?

Pairing the NYKO Type Pad via Bluetooth is surprisingly easy. It just requires a trip to the settings on the dash to add a new device which should take no longer than a minute. The PS4 will connect to it as long as it’s on and take commands from it when need be. There is an on and off toggle on the Type Pad but the nice thing here is that if you forget to turn it off, it seems like there’s an auto off shutdown when not in use to save battery. To turn it back on again, just toggle the switch off and on again.

The headphone pass through works like it should and functions even when the Type Pad is off. That means I can just leave the Type Pad connected at all times and not have to worry about it interfering with anything. You’re also not limited to just using the keyboard if connected. You can still bring up the onscreen keyboard if need be.

Back to the subject of the keyboard, the keys are raised quite a bit and the squishiness of the keys makes for a strange typing experience. There isn’t that distinct clicky feel you get from a real keyboard and you’re never quite sure if the keys your pressing are being entered correctly. It still functions the way it should, it just feels really strange. It probably would have felt better in my opinion if they went with plastic keys with more tactile feedback.

That’s my only real issue with the NYKO Type Pad, the feel of the keyboard. Despite this, the Type Pad does work quite well and makes typing long sentences a breeze. It also makes redeeming codes in the PlayStation Store much easier as I don’t have to swap back and forth between letters and numbers on the virtual keypad.

The NYKO Type Pad does what it says it does. It adds a physical keyboard to your controller that you can use on the PS4. Sure you can do this with a regular sized Bluetooth keyboard, but the Type Pad is in a position that is more easily accessible and takes up less space than a traditional keyboard. Most people are already familiar with thumb typing so using it here should come naturally – once you get past the squishy keys.

Overall, the NYKO Type Pad is just a really handy thing to have for the PS4. Sending messages is a lot easier with it as well as filling out Youtube forms when you’re uploading a video. It just makes everything more convenient even if it’s not entirely perfect.

Item provided to us by manufacturer and/or their PR rep. This does not affect the out come of the review.