I used to love the Katamari series on console where the gameplay was unique and strange. There was something really enjoyable about controlling and rolling up a giant ball of random objects to near planet size that made it super fun and addicting. However, on mobile it just wasn’t quite unique or fun. The original Katamari game on mobile was nothing more than a mindless tapping game. The latest mobile game though, Amazing Katamari Damacy, while also not like the console versions, is at least more fun now and is a bit more like the game I remember.

Amazing Katamari Damacy isn’t a tap tap game this time around thankfully. Instead, this game is an endless runner. While not an open world game like the original console games, this one is a lot closer in style than the previous mobile game.

First the art style is very much Katamari. It’s loud, colorful, and quirky. Like the originals, real world objects are half rendered realistically and half cartoon like. It’s a fun style and will be recognizable to fans. Audio too is very much Katamari with a fun, upbeat Japanese style soundtrack and lots of little sound effects straight from the console games.

As for the gameplay, like I said above, it’s an endless runner. While not the same as the original game, it does a pretty good job of mimicking it. You start off indoors picking up random small objects and as you’re Katamari gets bigger, you start picking up larger objects. As your Katamari increases in size, you’ll also notice that the surroundings start to change. You quickly go from being indoors and end up outside, again picking up much larger objects now. It’s pretty fun with controls that are easy to pick up and learn.

However, these controls need a bit of work. While swiping left and right works, the controls don’t feel quite as tight and responsive as they should be. Also because this game doesn’t actually have defined tracks like other endless runners, it’s easy to miss objects to pick up as well as running into obstacles. There are tilt controls too, but I don’t think it works quite as well. 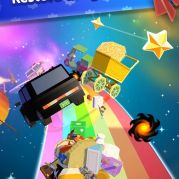 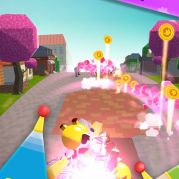 Roll your Katamari into a ball of galactic proportions in this cosmic endless runner. Help the Prince in this amazing adventure, collect thousands of objects, and team up with your royal cousins on a mission to restore the galaxy. Rush through lovely levels and help the King of All Cosmos to win back the Queen’s heart. Oh, and save the universe from impending doom!

GALACTIC HIGHSCORES
Roll as far as you can while collecting valuable items. Run down the endless cosmic rainbow and get the biggest highscore the galaxy has ever seen!

CALL YOUR COUSINS
Your royal relatives Foomin, Marny, Fujio, Macho, Opeo and Nik are ready to rumble. Upgrade each and every one of them to unleash their full potential.

AVOID TREACHEROUS HAZARDS
Jump over all-devouring black holes and avoid hazards including cats on skateboards, charging cows and a parade of zoo animals.