While party platformer, Runbow may be out already digitally, a physical Deluxe Edition  will be heading to stores on August 10th thanks to 13AM, Headup, and Merge Games. The Deluxe Edition collection will include the full game, all DLCs as well as two sticker sets. The DLCs included are Satura’s Space Adventure as well as all 4 costumes and music packs. In addition, you’ll get two fun sticker sheets: 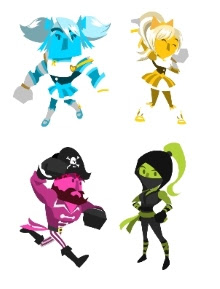 The pricing of the Deluxe Edition will be $ 29.99 for both platforms, PlayStation 4 and Nintendo Switch – and it contains so much fun for the whole family! You’ll also get it on Game Fairy including the soundtrack on CD as digi-pack.

Runbow features an eye-catching color mechanic that has racers brawl against each other while objects and platforms appear or disappear based on the continually changing background color. With 8-player madness locally or online, 5 game modes, 19 guest characters, hundreds of levels, and tons more content all in one unforgettable colorful game.