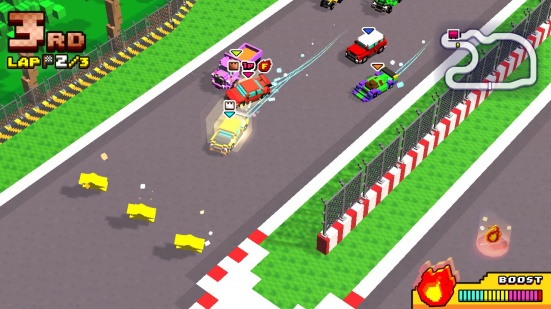 If you can believe it, Son’y publishing label, UNTIES and Pocket today released Chiki-Chiki Boxy Racers on the Nintendo Switch today. This is a multiplayer slot car racing party game for up to eight players, either locally or online.

Race solo or against friends across 15 tracks with intuitive controls that are easy to learn and hard to master. Master the intuitive controls in this easy to pick up, but difficult to put down racer to maneuver around tricky curves and shoot into first place across 15 charming tracks set in three distinct environments.

The competition doesn’t end at the finish line. Chiki-Chiki Boxy Racers also sports four battle modes to keep the experience fun and fresh for the whole family. Enjoy a game of soccer on wheels in “Goal,” collect the most cash in “Coins,” push other players out of a battle arena in “Smash” or see who can win a vibrant turf war in “Paint” by coating the city in color.

Whether playing solo, on the couch with a group, or online, Chiki-Chiki Boxy Racers is a fast-paced party experience bursting with charisma. Race and battle while unlocking the game’s 20 customizable cars, rocking out to poppy tunes and soaking in its splashy voxel aesthetic.

Chiki-Chiki Boxy Racers is available via Nintendo Switch eShop for $9.99