It’s really hard not to acknowledge how popular the Nintendo Switch is now and how much the indie development community has embraced it. It seems like every week, more and more of my favorite indie games and series are making their way to Nintendo Switch, allowing a whole new audience to enjoy them. One example of this is OlliOlli, one of the best skateboarding series to hit consoles in recent years. The Nintendo Switch however gets a special version of this series called OlliOlli: Swtich Stance which includes both the original OlliOlli and the follow up, OlliOlli 2, all in one convenient package.

If you’ve played any of the OlliOlli games before, the Nintendo Switch versions are no different. Gameplay is pretty much exactly the same as before. These are straight up ports but I’m not bad at that because both these games were amazing when they first came out and they’re still amazing now.

Let’s start with the original OlliOlli. OlliOlli is probably the first 2D side-scrolling skateboarding game that many of you, who weren’t born before the 90’s, will play. This is a 16-bit looking, 2D side scrolling game that is as old school retro as you can get. That means that instead of concentrating on trying to make the game look as realistic as possible, much of the effort here was placed in its gameplay mechanics and making the game as fun to play as it is challenging. 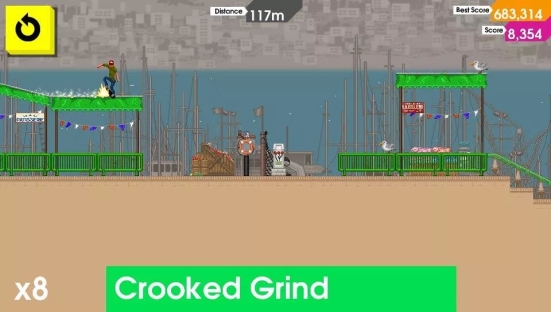 Control wise, the game seems simple enough. The left thumbstick is used for jumping, creating tricks, and landing grinds and when combined with the left and right bumpers, you’ll be able to pull off some pretty sick tricks. The bumpers themselves are used for rotation. What’s makes this game a tiny bit more difficult is that you also have to tap X to land your tricks and jumps. So if you’re keeping score, you have to basically keep your left thumb on the thumbstick at all times, as well as your index fingers for the bumpers and your right thumb on the B button. Again, it sounds simple but once you start playing, you’ll find that trying to do all this when you start off is actually very very difficult. As much as you think you can do this, it will take lots of practice before you can really master this game, and that’s okay with me.

I highly suggest going through the tutorial mode. It’s pretty basic, but it will teach you most of what you need to know to get started, mainly all the important stuff and will at least get you accustomed to the control scheme.

WIth OlliOlli 2: Welcome to Olliville, it’s more of the same. The controls are exactly the same as the original game which is a good thing because you don’t have to relearn the controls again for a new game. That’s not to say that there weren’t some additions though.

One of the biggest changes to OlliOlli 2 is the addition of manuals. You are now able to pull off manuals in order to string together an insane number of combos. Your combos are no longer limited to just rail grinds and air moves. You can now perform manuals as part of the combo and string together a group of jumps and grinds. This really changes the game and opens up a whole new level of play where it’s now possible to combo an entire stage if you’re that good. 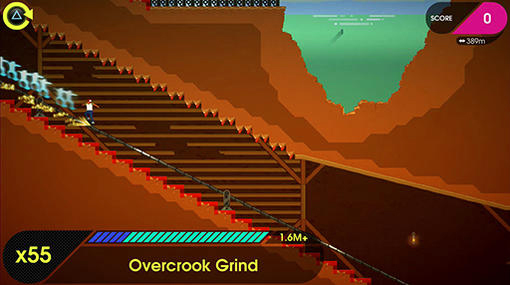 Both games include career modes. You start off playing through the amateur levels and progress to pro levels when you complete challenges. If you’re good enough to complete the pro challenges, you are awarded with rad levels which are even more challenging. Daily Grind mode is here too which resets itself every 24 hours. This mode allows you to play 1 surprise course daily to see who in the world can get the highest score. There are no do-overs in this mode. You only get once chance to impress. You can however practice before doing the level for your real score.

OlliOlli 2 however has something called Spots which you unlock a trick spot as you play. These trick spots allow you to try and pull out 1 continuous trick to see who has the highest score. It’s similar to the daily grind but its shorter and you can do these levels over. There’s also a new Skatepark mode, but these are really just tutorials that teach you how to play.

While both games in the OlliOlli: Switch Stance collection are essentially the same games you may or may not have played on other consoles, I would still consider this version the best. Mainly because you get both games for the price of one and because it’s on the Switch, you can play at home on a TV or on the go. If you already have both OlliOlli games on other consoles, it might not be worth to get it on here though, unless of course the Nintendo Switch is now your main console you play on and if that’s the case, you really can’t go wrong repurchasing this. It’s still a great game despite it being older, but it’s aged well and still super fun.