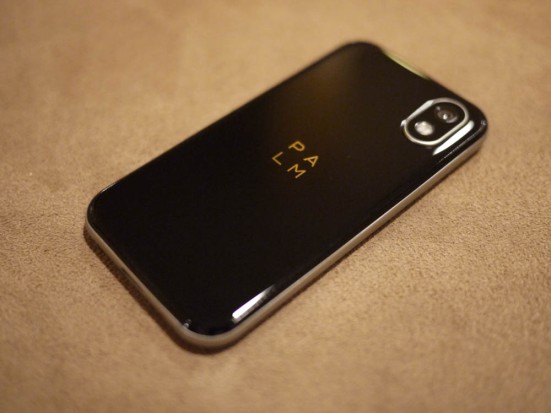 My first memory of Palm was back when they were battling it out with Blackberry for title of best keyboard equipped smartphone with their line of Treo devices. They never quite got to the level of Blackberry. Soon after they were bought out by HP and released a more modern device with the Palm Pre, but that ultimately failed as well. Now owned by TCL, they hope to bring the Palm name back into the mainstream with a new device simply called Palm. What was once a Verizon exclusive is now available to all as a fully unlocked device that will work with most major US carriers such as AT&T, T-Mobile, Verizon, Cricket Wireless and MetroPCS.

Disclaimer: Palm sent me their Palm Unlocked smartphone to check out along with a full set of accessories. I’m testing the phone out with my own AT&T sim card in Miami, FL. 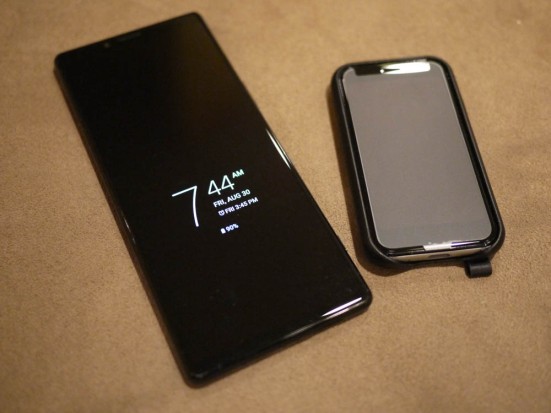 Palm has designed a pretty good looking tiny phone. That’ll really be the first thing you notice about it, that it’s very small. It’s not quite as small as another tiny phone I’ve looked at before, but the Palm is more manageable. The second thing you’ll notice is how much it looks like a tiny iPhone.

This is due to its curved edges, rounded corners, and all glass front and back panels sandwiching an aluminum frame. That’s not to say it doesn’t look good because it does. It’s a very appealing form factor that is comfortable to hold, doesn’t have any sharp edges, and very lightweight. It’s also follows a minimal approach as there’s only one button on it for turning it on and off, a camera on the back, one on the front, and a USB-C port on the bottom. The speaker also seems to be integrated into the ear speaker hole so I’m assuming they just share this.

The screen on the Palm isn’t that bad either despite being so small. It’s a 3.3″ display with a pixel density of 445ppi. The display has rounded corners with huge bezels on the top and bottom. The bottom bezel houses a touch button that acts as a shortcut for a few different actions. More on that later.

Other than that, there’s no real distinguishing trait about it that lets you know immediately it’s a Palm other then the size and the PALM logo on the back.

My Palm did come with an optional accessories pack that included a leather snap on case, lanyard, and wrist strap – both of which attaches to the case for easy carrying.

Being such a small phone, I wouldn’t assume for the Palm to have the highest level specs and it doesn’t. It doesn’t even have mid-range specs, but for what the Palm is meant to be used for, it probably didn’t need anything that high. Below is a quick rundown of what it has.

As you can see, the specs are nothing to write home about. Again, this is meant to be a secondary device, or a main device for someone who isn’t on their phones very often or as a starter device for a kid. Even though this is the unlocked version, it’s still not entirely meant to be your main device. 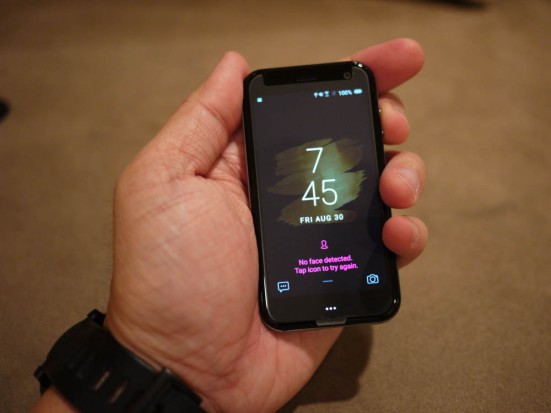 While the Palm does run Android 8.1, the launcher skin Palm uses makes it look like no other Android device out there. The launcher consists of three vertical rows that you slide up and down to get to your apps. Any apps that you don’t want to show on the top, you can move to the bottom “tray” area. You just swipe up a second time near the bottom to access it.

As for the lock screen, you can unlock your device the traditional way with a pass code or you can use facial recognition and it’ll unlock on its own when you lift and let it scan you. This is the preferred method and is fast and works quite well. And while we’re on the subject of the lock screen, Palm has implemented something called “Life Mode” that you can turn on and off. What this essentially does is disables all notifications when the phone is locked and the screen is off. That means you won’t get notifications from apps, phone calls, or texts. You only receive notifications once you turn the screen back on.

Palm says this is to reduce screen time and distractions and in an essence, that is what it does. This is great for tasks like while you’re working out, at the movies, having dinner with the family, in a meeting, or even just napping. On the downside, you miss out on what might be an important text or call. While in practice this might be a good thing, I don’t know how many people would actually enable “Life Mode” considering how much we all rely on our phones these days.

Early I also mentioned a touch button on the bottom bezel. This is used for UI shortcuts. Mainly if you tap it once, it goes back to the previous screen. Tap it twice and it scrolls you all the way back up to the top of the home screen. If you hold down the button, it brings up the app switcher.

All-in-all. it works quite well because of the small screen and makes touch operations simple and one handed. You should really have no reason using two hands with the Palm.

I’m just going to come out and say that I’m a bit disappointed with the camera, but not surprised. If you’ve had nothing but flagship devices, you will notice quite a difference in image quality. The Palm cameras which on paper seem to be good, the 12MP and 8MP units are just average in real life.

I’ll let the photos below speak for themselves. 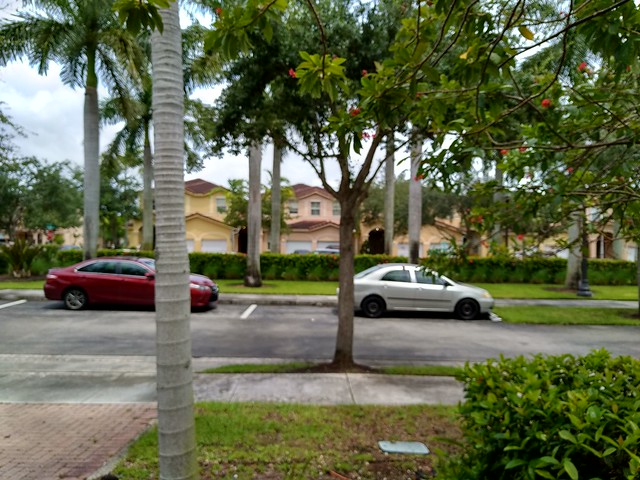 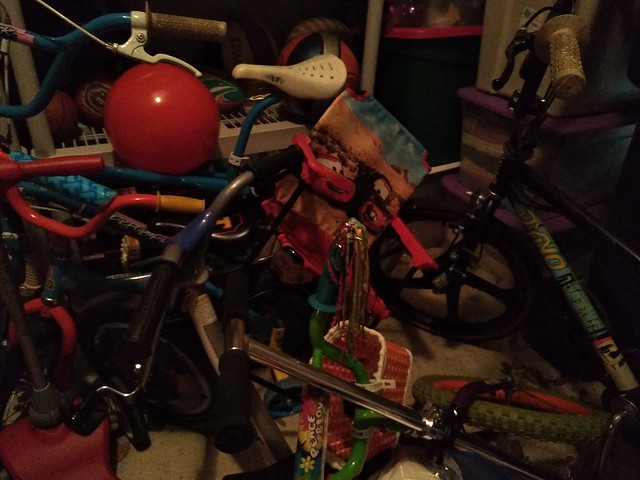 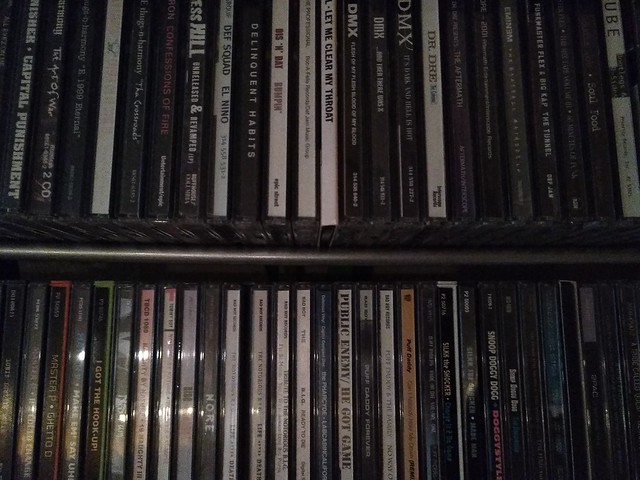 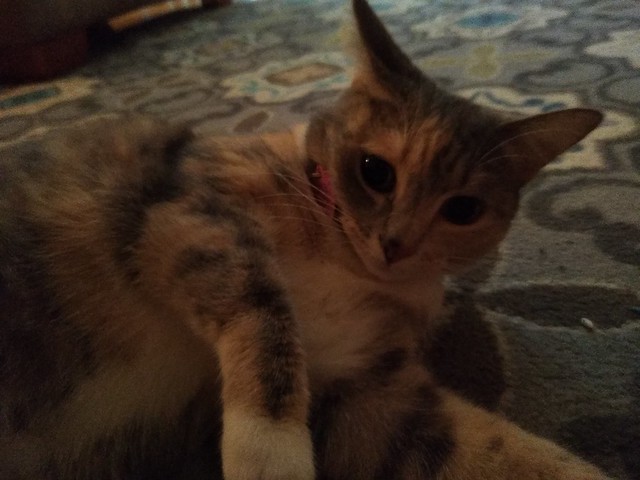 You can check out the rest of the sample photos here om Flickr.

With that said, I mean the cameras are still usable. There’s nothing special about them. Focusing is not great, colors don’t really pop, and the photos themselves are just kind of dull. Also low light photos are not great unless you use a flash. If you plan on using the Palm as a second device, you probably wouldn’t really care anyways about the cameras and if it’s a device for kids or elderly, it’s perfectly passable as a main camera. It’s just not up to my personal quality standards.

Now there are issues with the Palm and some of it is due to the size. For starters, the battery life on the Palm is abysmal. They supposedly increased life of the battery recently with a software update, butt it’s still not very good. You’ll be lucky to get a full day of normal use out of the Palm even with minimal app usage. This is due to the small 800mAh battery which is a fraction of what larger phones usually have these days.

Next, the camera on the Palm isn’t exactly what I’d called great. If you’re used to flagship camera quality, you won’t get it here. The camera works well for taking photos here and there when you might need it, but I definitely wouldn’t use it as your main.

Lastly, while the phone looks fantastic without a case, you need a case and the best one is the Palm faux leather lanyard case. It fits snug, looks classy, and has a loop for attaching a lanyard or wrist strap.

If you’re looking for a really small phone with a tiny footprint and comfortable form factor, the Palm is something to consider. I’ve seen other tiny phones in the past but they were really small and hard to manage, especially with normal sized hands. The Palm is slightly larger and slightly more manageable. Palm went a long way to make it as user friendly as possible with a launcher that works for small screens, the ability to control most of it with your voice, and a keyboard that works relatively well for the size.

There are some trade offs however, the major one being the smaller than you’re used to battery size, but if you’re not using this as a main device, you can probably make due. Otherwise be prepared to charge up throughout the day or bring a battery pack with you. The camera is also an area where I’m not impressed so photo junkies may want to look elsewhere.

Aside from that, I can see what Palm was trying to do with the new Palm. It is a device with a specific niche and a specific target of people it’s trying to reach. I don’t know really how popular the phone is right now, but from my experience so far, it’s not that bad really. Having a device that is primarily just a phone with the ability to look at apps on your own time can be liberating – being off the grid without really being off the grid. Not only that, the small size makes it great for working out or other activities where carrying a large phone just isn’t feasible.

You can pick up your own Palm at palm.com.