I love games that are fun. I don’t care who makes them, whether they are indie or not. If the game is fun, I’ll play it. Of course it also helps if the game looks good too and it’s that one-two combo that I think makes Vertex Pop’s latest, Super Crush K.O. a winner. Super Crush K.O. is a fast-paced brawler set in a colorful, futuristic world swarming with evil robots you must destroy.

When a robot-commanding alien heartthrob kidnaps Karen’s adorable kitten Chubbz, Karen has no choice but to grab a laser blaster, put on her favorite neon jacket, and start kicking robot butt to save your cat. While you’re at it, save humanity from an AI apocalypse.

Let’s start with the art style before I get into the gameplay. I’m really digging it. I love all the hand drawn art in Super Crush K.O., from the character designs to the level designs. It all looks very good and super colorful. It’s one of the things that really drew me to the game when I first saw it. I like how the game basically looks like a living comic book

Aside from the art style, the audio in the game is also very well done. It’s got an upbeat soundtrack and the sound effects are very well done. There’s a real satisfying pow every time you hit an enemy

Aside from the presentation, the gameplay is what makes the game and no matter how good a game looks or sounds, if the gameplay doesn’t measure up, people aren’t going to play it. Luckily, Super Crush K.O. is a very fun brawler that provides lightning fast action and intense combat. The game is a blend of run ‘n gun action and intense beat-em-up combat. Mainly all you’re really doing is beating the crap out of different types of robots with a series of engaging attacks and combos. 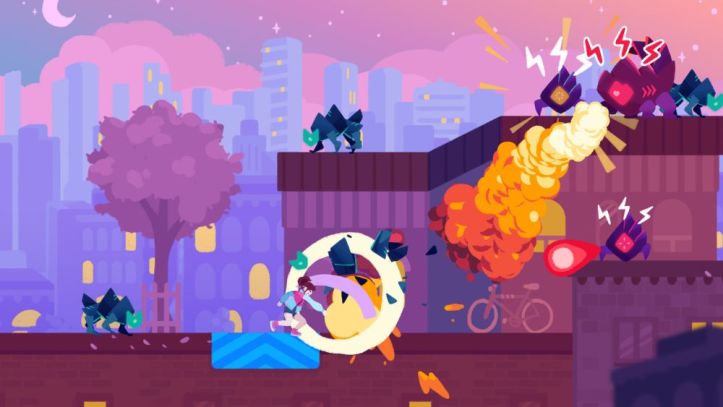 In fact, the combo system here is very easy to learn and quite intuitive. The first few levels of the game teach you how to play and add new moves to your arsenal as you progress. By the time the game actually starts, you’ll have mastered all the moves and should be able to string combos along as if they were second nature.

Once you get the combo system down, it’s time to complete each level by destroying all the robots. The levels themselves aren’t terribly difficult, but in order to get the best score, you’ll need to master your combos. While there aren’t exactly a lot of levels to play, you can go back to each level and try to beat your best score. There’s even a global leaderboard you can compete against.

Which brings me to this. Super Crush K.O. is a super fun game with solid brawling action. The only real complaint I have about the game is that it is a bit on the short side and doesn’t take very long to beat. However, this is one of those games where beating it doesn’t means the end. Like I said above, you can go back to each level and compete against the global leaderboards for the highest scores. You can also go back and try to S-Rank all the levels which is easier said than done. Aside from the action, I’m also really digging the graphics and art style which I think a lot of you will enjoy.

So with that said, Super Crush K.O. is worthy of a look. It’s one of those games that you can play is short spurts or in long sessions, but you’ll never be tired of the action. Now go save your cat!