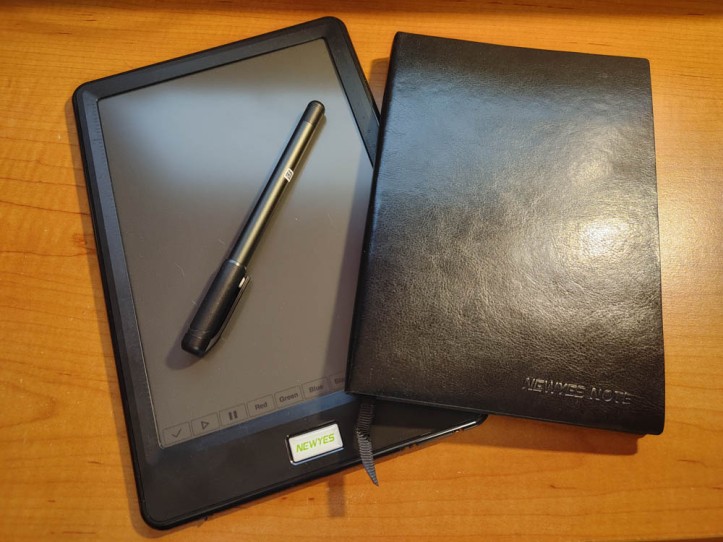 The NEWYES SyncPen2 is a next generation smart-pen that allows you to capture your thoughts and ideas digitally. How it does this is with the advanced SyncPen2 that can capture everything you write. This is thanks to Bluetooth 5.0, a hidden micro camera that is used in conjunction with the special 10″ LCD pad or the special NEWYES Notebook, and lastly the NEWYES Note app for iOS and Android.

First up, you’ll want to download the NEWYES Note app which is the centerpiece of the whole system. The app allows you to capture the information from the SyncPen2 to your smartphone, regardless if you’re using it with the LCD Writing Tablet or the Notebook. The app has the ability to not only capture everything at 1:1 ratio, but also has the ability to recognize text so that you can copy and past that text into your favorite text editors. Not only that, you can also import photos to annotate, as well as scan documents too. That app works quite well and seems easy to use enough to use.

Next up is the actual NEWYES SyncPen2. Unlike most smart-pens you might have seen, the SyncPen2 not only has Bluetooth 5.0 but also a hidden camera that captures information more precisely. The SyncPen2 is rechargeable via USB and automatically turns itself on and off when the pen cap is removed, despite what the instructions say. What’s cool about the SyncPen2 is that it allows for the changing of tips, whether it be the plastic stylus tip for the LCD Writing Tablet, or the ink pen tip for the Notebook. Both are easily swapped and it comes with a few of them in the package.

The SyncPen2 itself is pretty nice. It has a good length, good weight, and is relatively comfortable to hold. You do however have to hold it a certain way though. The camera part must always be on the bottom and face your writing surface and at a certain angle too. Anything under 45-degrees doesn’t seem to read correctly at times.

Like stated above, there are two writing surfaces you can use. First is the 10″ LCD Writing Tablet, which not unlike other eWriters we’ve looked at in the past. Basically you write on it with the stylus and when you’re done, just press the button at the bottom to reset the screen. It’s nothing new but I find it very interesting that the SyncPen2 and the NEWYES Note app know exactly where on the tablet you are writing. No matter where you write, the app just knows. Same goes for the Notebook too. The only difference is that with the LCD, you can reuse it over and over again where as the Notebook, you can not.

The Notebook is like any other notebook, but the pages seem to have some kind of pattern on the page, which might help the whole system detect where exactly you are writing. I will say that the Notebook itself seems a bit more accurate than the Writing Tablet.

Regardless of which method you choose to write on, the whole NEWYES SyncPen2 system works. You will need to use either the LCD Writing Tablet or the Notebook because it doesn’t work on plain paper. This is a great way to digitize your notes. If you’re one that wants to go paperless, the Writing Tablet is the way to go. If you rather have both a physical and digital backup, then the Notebook is the way to go. The choice is yours.

This isn’t the first time I’ve seen something of this nature, but it is the first time I’ve seen a system that combines multiple different products into one. I love the fact that the pen is multi-functional in the fact that you can change out tips and that it is rechargeable instead of requiring a battery. With that said, the NEWYES SyncPen2 is a terrific buy for anyone who takes a lot of notes and would like a simple way to convert that information digitally.

To learn more about the NEWYES line of products, visit their website here.