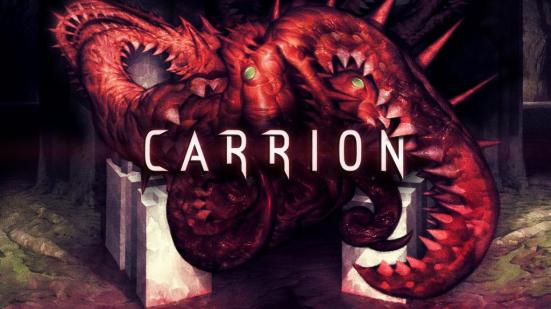 What’s better than horror games? Reverse horror games. I usually dislike playing horror games because how scary they can be but it’s a different story when playing as the monster. Instead of being the hunted, you’re now the hunter and the game is no longer about fear and is instead about causing fear. CARRION, by indie developer Phobia Game Studio and published by Devolver Digital is just such a game. In CARRION you play as a red, amorphous, tentacled monster that seems to have been captured by a group of humans to be studied. Bad idea as you’ve escaped and now you’re unleashing hell in their research facility.

Now there does seem to be an underlying story within all the killing and destruction. From time to time, you do a glimpse of what happened before the game starts you off as the monster. These little flashbacks occur through the eyes of the humans who captured you and show how you came to be at this facility.

While CARRION is a horror game, it plays very much like a Metroidvania style game. There’s a lot of exploring involved as well as some basic environmental puzzles that are needed in order to open up more of the world. What makes CARRION unique though is the way you move around the map and it’s because of your creature’s physical properties. You’re basically a blob of flesh with tentacles and instead of staying grounded, you can do and go almost any where. You can cling to walls and ceilings, climb up caverns, and swim in water. 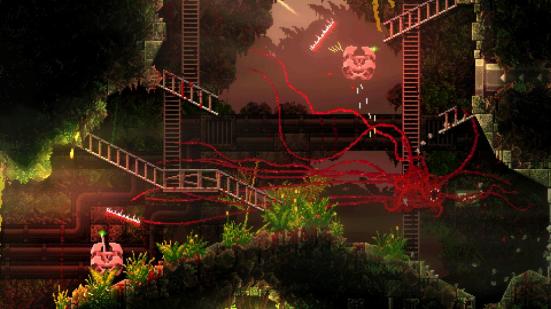 There’s basically no where you can’t go, except if it hasn’t been opened up yet. Much of the game requires that you find these hive points to leave some of your biomass which helps open up doors to new areas. These also act as save points and places to recharge your health and mass.

Speaking of mass, you first start off as this tiny little creature but as your progressive, you become much larger, more formless blob of mouths and tentacles, and much more dangerous. Not only that, you can also find upgrades while exploring that provide you more abilities such as being able to knock down once immovable obstacles as well as become invisible or even control other organisms. There’s actually a pretty wide variety of abilities you can use and I really think you’ll enjoy the game because of it.

Aside from the gameplay, CARRION is a very good looking game despite it retro look. I love how dark and creepy the environments can look and the art style really lends well to the theme. The lighting in the game also really adds to the creepiness factor. In terms of audio, you have your obligatory horror style music and ambient sounds in the background and the sounds from your victims really sell the horror of it all.

Devolver Digital and Phobia Game Studios have something really special here with CARRION. Again, I don’t usually like horror games, but I can admit that once I started playing this, I could not put it down. That’s how good CARRION is. And because this is a reverse-horror game, I wasn’t as nervous or anxious like I am with other horror games since I’m the monster in this one. With that said. I’d have to say that CARRION is one of a handful of favorite games this year. This is a reverse-horror game done right with the perfect blend of story, atmosphere, presentation, and gameplay.

Carrion is available now on the Nintendo eShop for $19.99.

I love to bring you guys the latest news and reviews whether it be apps or gadgets, but hosting and maintaining a website can be expensive. If you would like to purchase any of the items mentioned on the site, please do so by clicking our links to Amazon first (when available) and then purchasing the items. This way, we get a small portion of the sale and this helps me run the website.