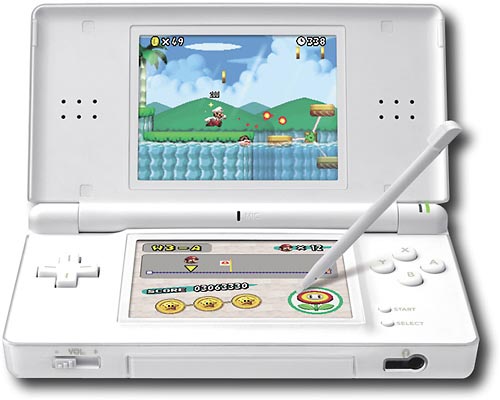 The Nintendo DS Lite is in my opinion the greatest handheld that Nintendo has ever created. An evolution of the original DS “fat”, the Lite version came in an attractive slimmer package that played both DS and Gameboy Advance games. Later DS handhelds did away with the Gameboy Advance slot which made them far less appealing in my opinion.

If you don’t already own one, Nintendo today announced that the DS Lite is now $99.99 starting June 5th! That means that anyone with a budget can pick up one of Nintendo’s greatest handhelds. I’m actually going to pick up another one at this price due to the fact that my son is pretty rough with my current DS Lite so it would be nice to have a backup unit when the current one eventually bites the dust. I’ve also heard that the DS Lite will eventually be discontinued which is another reason to pick another one up at this price before they are all gone.

For more information about the price drop, click the read more link blow for the full press release.

REDMOND, Wash., May 31, 2011 – The portable Nintendo DS™ Lite system is getting a new suggested retail price. Effective June 5, the system will be available at a suggested retail price of just $99.99 in the United States. The Nintendo DS family has become the best-selling video game system in history. More than 48.9 million systems in the Nintendo DS family have sold in the United States alone. Also in June, six Mario™ games for Nintendo DS will receive new red packaging, making it easier than ever for consumers to identify these hit titles in stores.

“From the moment it launched, Nintendo DS Lite hit a sweet spot for consumers in terms of value, experience and fun,” said Nintendo of America President Reggie Fils-Aime. “This new price point will introduce Nintendo DS Lite to even more consumers, and the new red packaging will make it easy for them to find their favorite Mario titles.”

The six Mario games that will begin sporting the new Mario-red packaging in June are New Super Mario Bros.™, Mario Kart™ DS, Super Mario 64™ DS, Mario & Luigi™: Bowser’s Inside Story, Mario vs. Donkey Kong™: Mini-Land Mayhem! and Mario Party™ DS. These games represent some of the best-selling fan-favorite Nintendo DS games of all time, and demonstrate the well-known “evergreen” sales trend of Nintendo games. Their total U.S. sales through the end of April 2011 according to the NPD Group are as follows:

Mario is one of the most beloved video game characters and the top video game franchise of all time. Thirty-one Mario games have topped sales of more than 1 million units since 1995, more than any other franchise. Through the end of March 2011, more than 262 million games in the core Super Mario™ series have sold worldwide.

About Nintendo: The worldwide pioneer in the creation of interactive entertainment, Nintendo Co., Ltd., of Kyoto, Japan, manufactures and markets hardware and software for its Wii™ home console, Nintendo 3DS™ and Nintendo DS™ family of portable systems. Since 1983, when it launched the Nintendo Entertainment System™, Nintendo has sold more than 3.7 billion video games and more than 600 million hardware units globally, including the current-generation Wii, Nintendo 3DS, Nintendo DS, Nintendo DSi™ and Nintendo DSi XL™, as well as the Game Boy™, Game Boy Advance, Super NES™, Nintendo 64™ and Nintendo GameCube™ systems. It has also created industry icons that have become well-known, household names such as Mario™, Donkey Kong™, Metroid™, Zelda™ and Pokémon™. A wholly owned subsidiary, Nintendo of America Inc., based in Redmond, Wash., serves as headquarters for Nintendo’s operations in the Western Hemisphere. For more information about Nintendo, please visit the company’s website at http://www.nintendo.com.