This review is also featured at G Style Magazine which is a tech blog that focuses on the fashion aspect of tech. Please visit their site for the complete review and more images.

For the past 2 years, I’ve been using a set of Astro Gaming A30 headsets with their Mixamp Pro system. You can check out the full review of those headsets here. The fact that I’ve been using them for so long is a testament to their durability and quality as I have never once had a problem with either unit. They’ve served me well over the years and will continue to be used. On that note, Astro Gaming recently sent me over their professional grade headsets, the A40 which includes the new 2011 upgrades. These A40 are further enhanced with the Saints Row 3 cross promotional livery and official MLG licensing. Astro Gaming was also kind enough to provide their Wireless Mixamp 5.8 system as well so that we could test the entire A40 Wireless System as a whole. As a disclaimer, yes, Astro Gaming did send us this set and we did also feature a month long giveaway for these exact sets of SR3 Edition A40 Wireless Systems, but this in no way affects the outcome of this review. Just for reference, the system they sent me was the Lt. Blue SR3 Edition A40’s, Wireless Mixamp 5.8, rechargeable battery pack, and the USB chat pack for PS3/PC. Grand total of everything retails for about $320 but the A40 Wireless System starts at around $279.99.

Here’s the meat of the review which most of you are probably the most interested in. These are the Astro Gaming A40 headsets which are the official headset of the MLG. Astro Gaming has had the A40 headsets around for a while as they predate the A30. The A40 however is Astro Gaming’s bread and butter as they are the flagship headsets for the company. These A40 however differ from the original ones as they’ve been upgraded to the new 2011 spec. This means that they now include the new microphone which filters out even more background noise and the new ear pads which help seal off even more ambient sounds so you can concentrate fully on your audio source.

The set I have here is also a special limited edition Saints Row 3 set which was launched in conjunction with the Xbox 360 game. They are available in 1 of 2 colors and come with limited edition Saints Row 3 tags as well. They come in either Lt. Blue or Purple and can be ordered with 2 different speaker tag designs. Both colors are very nice and offer up something different in comparison to the standard black and white colors they normally come in. 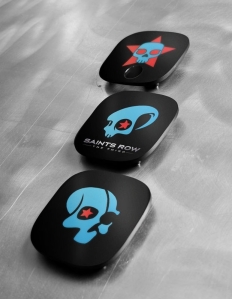 In comparison to the smaller and more compact A30, the A40 is pretty massive. The cups themselves are much bigger than on the A30 and go all the way around your ears. This is different from the A30 which rests on top of your ears. The A40 and its new ear pads completely seal off of ears from the outside world. The ear pads are very soft and because they go over your ears instead of on top, they also seem to be much more comfortable to use for long periods of time. The A40 is also fully adjustable to accommodate any size head and I like the fact that most of the wires are integrated in a way where they are not visible except for the main wire coming out of the headset. This gives it a very clean look. I also really like how there is a pad on the top inner portion of the A40 too so that the headset rests comfortable on your head and it’s not just bare plastic sitting up there like on some of the other headsets I’ve seen.

Design wise, you’ll be hard pressed to find anything to dislike about these. Even after all these years, the A40 still has a very strong design that has held up against all the new entries in the gaming headset field. In fact, I’d say they are still as gorgeous today as they were when they were first released. Like the A30, you’ll be able to customize the look of your A40 with custom speaker tags. The regular A40 comes with Astro Gaming speaker tags while the Saints Row 3 Edition also comes with 3 additional SR3 themed speaker tags in either blue or purple depending on which ones you get. I opted for the blue skull ones as they matches the Lt. Blue color of the A40.

In terms of sound, the A40 is a joy to use. They cup around your ears and help filter out outside noises. When used in conjunction with the Mixamp 5.8, they offer true 7.1 Dolby Digital Surround Sound. When turned up, the sound is crisp and clear and you can really hear the direction individual sounds are coming from. This was the same with the A30, but the A40 just seems to offer more of it due to how they sealed around your ears. The A40 also offers a quick disconnect cable that allows you to unplug from the Mixamp, although not really necessary anymore since you carry the wireless Receiver (RX) with you all the time now. The ability however to connect different kind of cables to it though are definitely a plus and is something also seen with the A30.

The A40 is not a small headset like the A30. It’s fairly massive and not very portable like the A30 was. It also does not fold up for travel like other headsets do but the ear pieces can be turned so that the entire headset can lay flat, which does allow for slightly easier transport in a backpack. 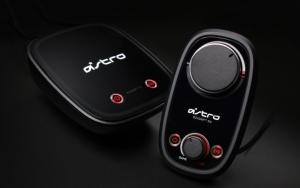 We’ve already reviewed the Wireless Mixamp 5.8 system here on G Style before. Our Editor In Chief Jason Anderson gave them a glowing review here if you you’d like to check them out. I will however be providing me own review of them again here as well. For starters, I already own a Mixamp Pro. Unlike these, the Mixamp Pro was a wired unit that provided 7.1 Dolby Surround Sound when paired wit ha compatible headset. In this case, I was using the A30’s as reference. The Mixamp Pro also connected view composite cables and was powered by a USB cable or a rechargeable batter pack. Now, the new Mixamp 5.8 are completely different from the Mixamp Pros. For starters, you can’t just switch the cables and automatically turn your whole setup wireless. That’s because the Wireless Mixamp 5.8 uses optical cables instead of composite cables. That means you’ll need to rewire your entire setup to work with these. In my case, I ended up just plugging the optical cable into the optical port on my Xbox 360 and left the original Mixamp Pro where it was. The Wireless Mixamp 5.8 is also powered by a dedicated power cord so you’ll need to free up an outlet for it.

As you can see from the image, the Wireless Mixamp 5.8 is now made up of 2 separate units. There is the Wireless Mixamp itself and the new Wireless Receiver (RX) Unit which is what the headset plugs into. The Mixamp 5.8 is about the same size as the original Mixamp Pro except that it is devoid of any dials. It only has 2 buttons on it. The power button and the Dolby on/off button. It again comes in a slick piano black which will look great anywhere you place it. The Receiver (RX) Unit is where all the control functions are located. It has the same volume dial as the Mixamp Pro along with the game/voice mixer dial to adjust the amount of in game volume and chat volume. There is also an on/off button and a Bass Expander on/off button. The Receiver (RX) is powered by either 3 AAA batteries, or the optional rechargeable battery pack which can be recharged via USB cable. I’m using AAA batteries for now as they came with them as is the setup most people will use unless they decide to upgrade to the battery pack later. The Receiver (RX) also includes a handy belt clip that snaps on to yhe back of the (RX) unit and allows you to clip it anywhere on you since this is the part that your headset will attach to and the part that you need to carry with you at all times.

In comparison to my original Mixamp Pro, the Wireless Mixamp 5.8 is a dream to use. I am no longer confined to the distance of my cables and I am now free to roam most of my house without having to take off my headset or disconnect from the Mixamp. They seem to reach quite far too as I have the Wireless Mixamp 5.8 mounted upstairs and was able to still hear audio from my games all the way downstairs. This is most likely due to the fact that the Wireless Mixamp 5.8 uses the 5.8ghz frequency instead of the more common 2.4ghz frequency that almost every other piece of electronics I own uses. This also means less interference with nothing but crisp, clean sound. Having the Receiver (RX) close to you at all times is also quite handy as now its much easier to adjust the volume since it is now attached to you. Before I would have to get up and adjust the volume on the Mixamp itself, but no more. Now I can just reach down to the Receiver (RX) and do it from there quickly.

The A40 is Astro Gaming’s flagship headset. They are well made, comfortable, and sound great. If you’re a hardcore gamer, I highly recommend the A40. They are everything a hardcore gamer looks for in a headset. Good fit, comfort, and quality construction that will stand up to tons of abuse and longs hours of gaming. They however aren’t for everyone. For the casual gamer, you’ll probably want to go with the A30 which is smaller, more portable, and can be used for a variety of other devices. The A40 is really more for straight gaming and watching movies. Whether you choose the A40 or the A30 however, you’ll want to definitely go for the Wireless Mixamp 5.8, if your setup allows for it. The advantages of the wireless system outweigh the extra price you will need to pay for it. You’ll be rewarded with excellent sound and the ability to move as you please.

The total price of the Saints Row 3 Edition A40 Wireless System starts at $289.99. You can get the regular editions for $10 less but if you want to have a bit of color, I suggest you go with these. I would also opt for the $10 PS3/PC USB chat cable if you plan on using these with a PS3 for gaming. The A40 is a fantastic headset for gaming even though the price seems to be high, you’ll be paying for quality you can definitely see and feel with these headsets.