Gaming headsets are a huge business these days with tons of different manufacturers competing for your business. They range from low end headsets to more expensive high end headsets and in the end, the ones you choose are mainly based on what you can afford. Why are gaming headsets big business? Well, because most consoles these days don’t include headsets unless you buy an Xbox 360, and the ones included with that are crap. They only allows for chat and don’t immerse you in the game. If you are an avid gamer, the first thing you’ll want to invest in is a good gaming headset, one that not only allows for chat, but also allows you to hear the games as if you were actually in the games. One such company that makes gaming headsets is Skullcandy and their latest headset, the PLYR 2 is what I’m looking at today. What makes these quite interesting is that Astro Gaming had their hand with the design of these and it shows. As a disclaimer, I love Astro Gaming headsets and own not only the critically acclaimed A40 headsets, but the A30 headsets as well. That’s why I was excited when I heard about the PLYR 2 and even more excited that I would be able to get my hands on a pair.

One of the first things you’ll notice about the Skullcandy PLYR 2 headsets id that this is not a typical Skullcandy design. In fact, I’d say they are completely different from anything Skullcandy has made in the past. Again, this is probably attributed to having Astro Gaming as part of their family now and the influence they are having in their designs. The PLYR 2 headsets are very clean looking, with a design that is very attractive, functional, comfortable, and sleek. The PLYR 2 headsets are available in 3 different color combinations, the ones I received were the matte black pair with yellow accents.

Unlike the previously mentioned Astro Gaming A30 and A40 headsets, the PLYR 2 headsets do not need a separate wireless adapter in order to function wirelessly. Instead, they are built into the headset itself, similar to the new A50 headsets. All you need to do it connect the wireless receiver to your TV and gaming console and you’re pretty much set to use them. On the wireless receiver, you need to plug in the audio cables first that connect to your television set that goes between the audio cable from your gaming console to your TV. The connect the included USB cable to your video console for power. I like this setup because it does not require a separate AC adapter which takes up space. There is also another USB cable you can connect to the wireless receiver that will charge your headset when not in use. Yes, the PLYR 2 headsets are rechargeable and do not require batteries. Huge plus here in my book as batteries don’t come cheap. On the right ear piece, you’ll find the power button to turn on the headset as well as the volume control “joystick” which I’ve never seen this type on control on a headset before. Basically each tirection o nthe joystick either lowers or raises the volume as well as allows you to adjust game or chat volume. It’s pretty ingenious actually.

On the design side of things, the PLYR 2 headsets are full of little details. Padded ear surrounds as well as padded head support, an intricate design etched into both side ear pieces, and even on the inside of the ear pieces themselves, Skullcandy has their logo somehow burned into the padding. It really is a gorgeous design and the yellow accents just make it stand out even more. The boom mic on the left side is also a very elegant piece. It’s entirely surrounded in rubber and very solid feeling. You’re able to bend it to almost any position and it actually stays in position. It even includes a very handy feature. Flip it down to chat in-game or flip it back up to mute chat. Very simple to use and again, ingenious.

Using the Skullcandy PLYR 2 gaming headsets couldn’t be more easy. Basically you just hook up the wireless receiver between your TV and gaming console and then sync the headset to the receiver. That’s an easy process as well as you just hold down both power buttons and wait until they stop flashing. Very simple and pain free. On the PlayStation 3 and PC, you’re pretty much set to go after but if you’re using this on an Xbox 360, you’ll have to hook up another cable from the headset to your game controller. This obviously is less elegant, but blame this on the Xbox 360 for making you do it this way. It’s the same way for all headsets used on the 360, but mainly if you plan to use it for chat.

To control the volume on the PLYR 2 headset, use the 4-way control stick on the right earpiece. Up and down control the volume globally while left and right adjusts the amount of in-game volume in relation to in-game chat volume. On the right earpiece, you’ll also find the 3-way toggle for EQ modes. This is used to switch between game, movie, and music sound profiles. To recharge your headset, just plug it into a USB cable and you’re good to go. It doesn’t take that long either to fully recharge them.

The PLYR 2 headset can also adjust to pretty much any head size. They are adjustable height and they are springy enough where they can also adjust to head width. Again, I find them to be very comfortable to wear for long periods of time thanks to the heavy padding and I like the fact that the ear pieces fir around your ears and don’t sit on top of them. The padding used is very soft allowing them to easily mold itself to your head.

Overall, the Skullcany PLYR 2 headsets are a great alternative to the more expensive Astro Gaming headsets. They may not feature the advanced Dolby Digital 5.1 or 7.1 surround sound, but for the casual gamer who wants something better than the stock headsets, these are definitely a step above the rest. I would say these are just as good as the Astro Gaming headsets in terms of quality and build and the wireless feature is certainly a huge plus. They might not have the high end sound quality that the Astro Gaming headsets have, but in my opinion, they still sound great and again, the average gamer will be very happy with these.

The price of the Skullcandy PLYR 2 gaming headsets are around $129.95. That is very competitive pricing considering most others are a bit more or around the same price range for similarly spec’d wireless headsets, but with these, you get headsets that very comfortable, well made, easy to set up, and despite just being stereo headsets, they sound very good. 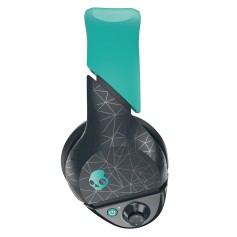