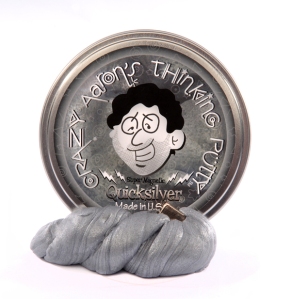 The other day, I was sent something totally different from what I normally look at here. In fact, it’s something that normally my son plays with on occasion if someone happens to give him an egg full of it. It’s putty, but what I got is something more than putty. It’s Crazy Aaron’s Super Magnetic Thinking Putty which is basically the most advanced putty ever created! Seriously though, this is super putty with all its stats leveled up to 100%. Unlike regular super putty, this stuff is magnetized and comes with a super strong neodymium magnet which means, this ain’t your kids putty.

Unlike regular putty, Crazy Aaron’s Super Magnetic Thinking Putty comes in a fairly large tin and you get about 1/5th of a pound worth which makes it a good handful of putty. The Quicksilver color I was sent has a very metallic look to it with tiny glittery specks. As stated above, it also comes with a decently sized neodymium magnet. As such, it’s not something you want to give to your kids as it can be easily swallowed which is why this product is rated for use by those ages 14+.

If you’ve never played with putty before, there are tons of crazy uses for it. You might think it’s just like clay but there is so much more to putty than just molding it into different shapes. For starters, putty does not dry out like clay does and is super stretchy. You can stretch it, mold it, flatten it, roll it up into a ball, twist it, and squeeze it. Literally you can make it do whatever your imagination thinks of. If you check out crazy Aaron’s site here, you can read up on tons of neat tricks and uses for his Thinking Putty.

As fun as putty is, the one thing that makes Crazy Aaron’s Super Magnetic Thinking Putty totally different from regular super putty is its magnetic properties. On it’s own, it’s just like regular super putty but when combines with a magnet, it takes on completely new properties with new ways of playing with it. When in the presence of a strong magnet, the putty will slowly move towards it. It will even engulf the entire magnet on its own, which is a crazy thing to see as it makes the putty seem like it’s alive.

There really is a lot you can do with Crazy Aaron’s Super Magnetic Thinking Putty and it’s impossible to list them all here. In fact, there’s probably things I haven’t even thought of yet to do with my putty so it’s always cool discovering new uses for it. Yes, I know putty is usually something kids play with, but as adults, it makes for a really fun stress reliever and also allows you to exercise your mind and creativity a bit as well.

You can buy Crazy Aaron’s Super Magnetic Thinking Putty for $14.95 here as well as other putties they offer. If you act now, you can get 20% off your purchase when using the code “cyber2012”.