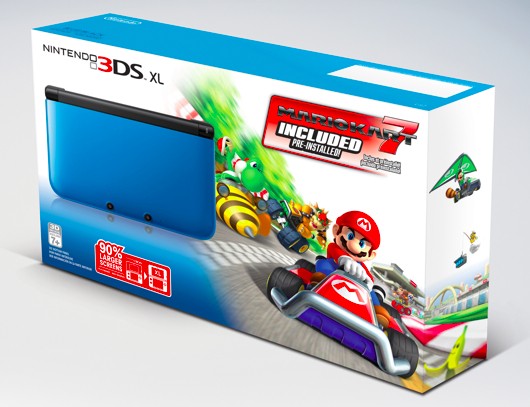 I have yet to jump on a Nintendo 3DS seeing as there are still no shortage of games that can be played on the old Nintendo DS. My son mainly plays it and he has not asked me yet to upgrade. If he did though, I would most likely jump on the new 3DS XL mainly because of the larger screen and I would think it would be better for his eyes.

If you are in the market for a Nintendo 3DS XL, Nintendo will be releasing a limited edition bundle this holiday season that comes in an exclusive Blue/Black color scheme and will be bundled with Mario Kart 7 pre-installed. The price for this will be $199.99. It’s still not as cheap as I’d want it to be, but at least you get a cool new color and a game.

REDMOND, Wash.–(BUSINESS WIRE)–Mario Kart fans are getting a limited-edition bundle to help keep their engines revving through the holidays. On Dec. 2, Nintendo is offering a Blue/Black Nintendo 3DS XL with Mario Kart 7 pre-installed on the system for a suggested retail price of $199.99. If purchased separately, the system and the game would be offered at suggested retail prices of $199.99 and $39.99 respectively, making this another great Nintendo value for holiday shoppers.

Mario Kart 7 lets karts race through the air and under the sea for the first time. On big jumps, karts deploy a wing to help them glide over the track. When karts dive underwater, a propeller pops out to help the kart cruise across the sea floor. Players can customize their vehicles further to enhance their driving style or play to certain types of terrain and even race as their own Mii characters. Multiple courses challenge players to race for the checkered flag.