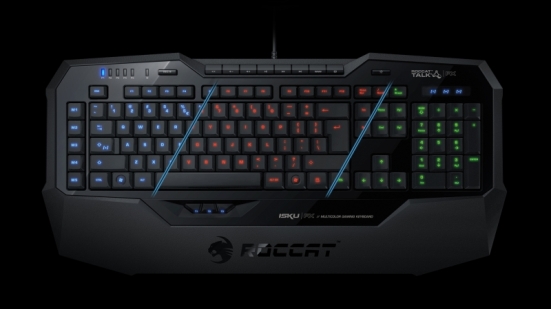 When it comes to PC gaming, there are really only a few things that matter if you want to stay competitive. Some might think its how powerful your machine is, but in all honesty, all that power means nothing if you are using inadequate input devices like an OEM mouse and keyboard. Nothing beats a good gaming keyboard and mouse when you are trying to be the best, especially if those both are programmable allowing you to customize the best layout for whatever game you’re playing. I’ve looked at a couple mice in the past and one keyboard so today, I’m looking at another keyboard I just received, the ROCCAT Isku FX.

This isn’t the first product I’ve seen from ROCCAT. A while back, I had a chance to look at the ROCCAT Savu and I really liked the way it looked and the features it had. The ROCCAT Isku FX has the same sleek, stealth look the Savu has as well as a ton of features to boot. Of course judging it solely on looks and specs doesn’t but it so how well does it perform in the real world? Well, read on and find out.

Like most of ROCCAT’s products, the Isku FX features an entirely black body. Most of the keyboard is covered in a textured matte black plastic while the face of the keyboard itself is a very glossy, fingerprint magnet black. It’s a very good use of contrasting textures despite the amount of smudges you’re going to get on it. The keys themselves are also black and feature a matte finish with light grey text. The text however can change into any color you want thanks to this being a backlit keyboard. 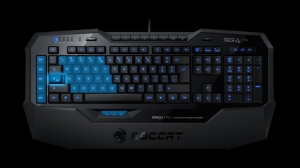 Speaking of the keys, they seem a bit shallower (not as tall) as the last keyboard I used. It feels kind of weird at first, almost like typing on a laptop, but you get used to it after a while. It does seem to make key presses a bit quicker as it doesn’t feel like you have to press down as far. The keyboard layout is pretty standard with all your standard keys laid out where they should be. The only differences with the keyboard are the 5 programmable M-keys on the left side, the CAPS LOCK key which is also used as the Easy-Shift key, the three T-Keys below the space bar, the macro record key, and the media keys up on top. ROCCAT has made it so all the programmable keys are in reach of your left hand. The M-Keys can be reached with your pinky and the T-Keys can be easily reached by your thumbs. They’ve even made it so that the Isku FX has 20 programmable macro keys that use the first 5 letters of each row and the first 5 numbers at the top. This gives you a total of 36 possible customizable macro keys. 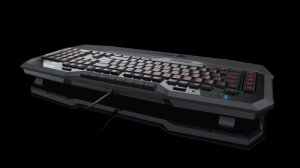 Back to the keyboard itself, one of the neat design features is that the Isku FX has a built in wrist rest as part of its design, so it does take up a bit more room than your average keyboard. The rear of the keyboard also has built in cable channels so that you can channel your mouse cable through it for a cleaner setup. The back also has a good amount of rubber grip around it and on the flip out feet which helps keep the IskuFX planted during play.

Overall, the look, feel, and layout of the entire keyboard is both functional and attractive. Everything is laid out intelligently with the fit and finish of the Isku FX being top notch. It feels very sturdy even though it’s actually quite thin for a gaming keyboard. It’s not as heavy as the last gaming keyboard I tried out so this could also be a pretty decent travel keyboard as well. My favorite feature though are the customizable backlit keys.

Like most gaming keyboards, the Isku FX has software you need to download to make the most out of it. In fact, without the software, the keyboard is basically just like any other keyboard and won’t do much in terms of customization. You’ll need to head on over to ROCCAT’s website here and download the latest driver for it before even plugging it in.

Once you have the ROCCAT Isku FX driver software installed, you’re ready to get your hands dirty customizing your keyboard anyway you want. For starters, the ROCCAT software is by far one of the most in depth and advanced ones I’ve seen. You can literally almost customize anything on this keyboard using the software. I’ll go through each tab in the software so you can get a taste of what to expect. 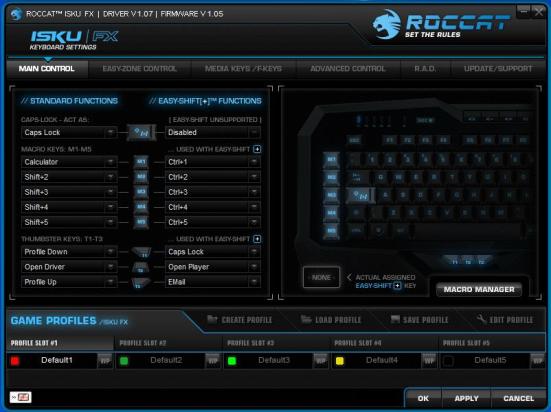 The first tab is the main control screen. From this area, you can customize what the five M-Keys do. You can assign these keys to do anything you want from using them to open up certain programs to using them to perform certain actions in programs. If you have the Easy-Shift mode activated for the Cap Lock key, you can assign five more actions to those M-Keys. This first tab also allows you to customize what the bottom three T-Keys do. Again, you can set these to do almost anything you want them to do. 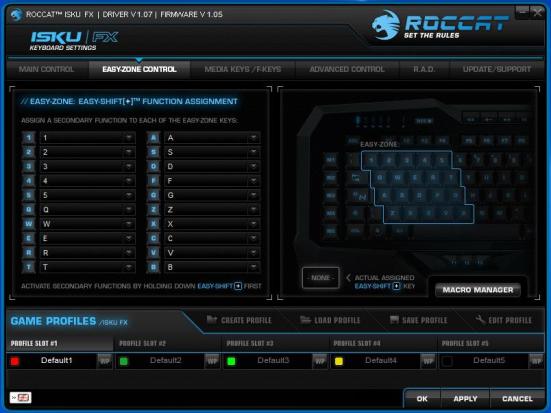 The second tab allows you to customize the Easy-Zone controls. These are the 20 keys on the regular keyboard that you can assign macros to. In order to use them, you will need to activate the Easy-Shift feature, otherwise they won’t do anything other than their regular key functions. 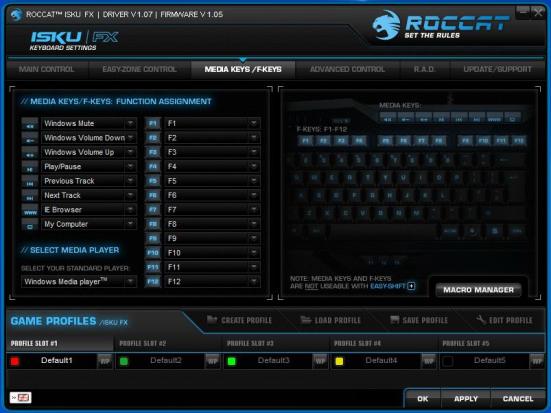 The third tab allows you to customize what the media keys do and what the F-Keys do when pressed. For the most part, you probably want to leave these keys alone as they should already do what you want them to do. However, like with the other keys you can customize, you can really assign these these keys to do whatever you want. 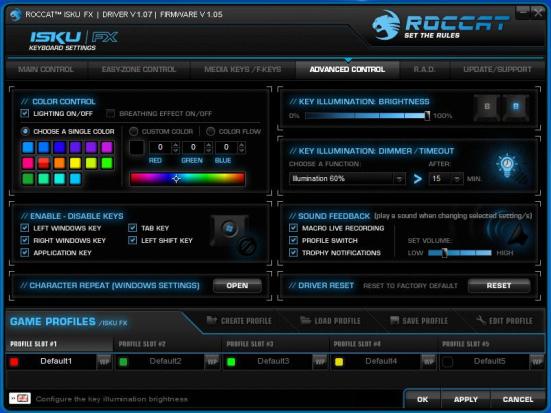 The advanced control tab allows you to control the aesthetics of the keyboard. Here you can customize what the color of the back-lighting will be on the keyboard. You can set it to a single color or you can have it pulsate with different colors. You can also adjust the brightness of the backlighting as well as the increments in brightness. This can be done using the brightness key on the Isku FX. You can even have the keyboard automatically turn backlighting off after a certain amount of time of being idle. Lastly, this tab also allows you enable or disable certain keys such as the Windows keys, application key, and the tab and shift keys. Not sure why you would disable those, but you can. 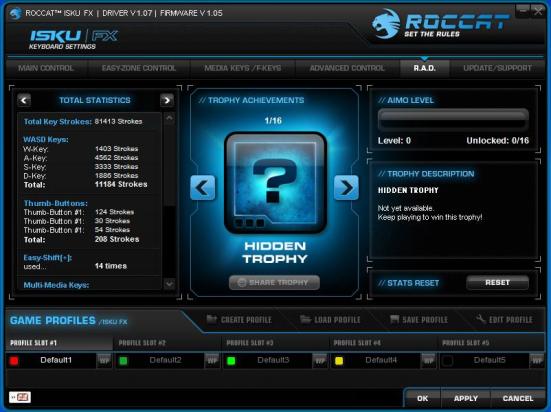 The last real tab you can mess with is the R.A.D. tab. This tab keeps stats on the Isku FX. I saw this previously with the Savu mouse in which the software keeps track of things like number of key presses for certain keys as well as offering up some trophies for specific tasks completed with your keyboard. Not sure what they are supposed to be though but they open up automatically over time. 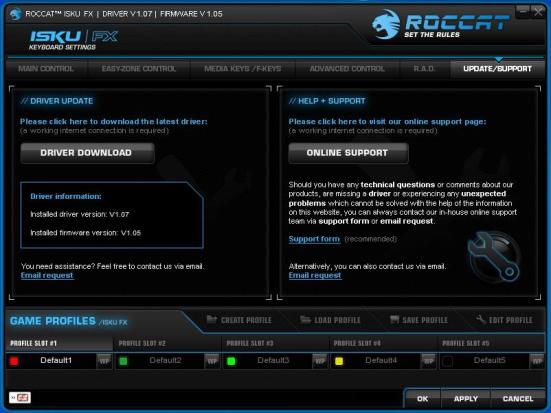 The very last tab in the group allows you to download the latest drivers as well as find support for any problems you may encounter with the Isku FX.

If you noticed, at the bottom of each of these tabs where more tabs for Game Profiles. There are 5 profiles you can assign at a time and each profile can have it’s own custom keys. Not only that, you can save profiles for later use and load them back up whenever you need to use them again. I highly suggest keeping 1 profile as a default Windows profile that can access all the basic features of Windows. Use the other 4 profiles for games or programs that you use a lot. Each profile can have it’s won custom backlighting color so you can easily identify what is activated based on sight. I also have profiles easily accessible via the T-Keys at the bottom.

Lastly, the Isku FX features something called ROCCAT Talk and Talk FX. ROCCAT Talk allows the Isku FX to talk with other Talk compatible ROCCAT devices and combine their functions. This in essence lets your keyboard and mouse act as one. I could not test this out however as my ROCCAT Savu mouse is not Talk compatible. You’d need to have the ROCCAT Kone to make use of this. As for ROCCAT Talk FX, this allows the lighting on your keyboard and mouse to change depending on in-game elements and actions. The video above shows you a bit of how this works.

In case you haven’t already figured it out, the ROCCAT software is very advanced. There is literally tons you can do with it and there is nothing you can’t program to a key. Even if the option for something doesn’t exist, you can record your own macros and make it yourself. It’s that powerful. Of course this may be a bit much for novices, but the more you use the software, the easier it will be to get the most out of your keyboard. 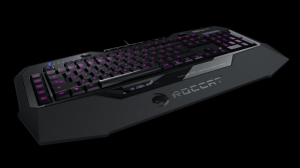 The ROCCAT Isku FX is certainly a stylish and highly customizable keyboard for PC gamers. Not only that, it can even be the perfect keyboard for power users of popular programs like Adobe Photoshop, MS Office, and even Firefox and Safari. There are several games and programs already with built in presets for the ISku FX and for everything else, you can create macros easily for any program and game that isn’t on the list.

I love the way the Isku FX looks as it has a very stealthy look like the rest of their products and having the backlighting enabled against a sea of black looks very stunning. It’s a thin keyboard that is actually quite light and like I stated before, very easy to carry around too as there is not a separate power adapter you need to lug around. There really isn’t much not to like about the design and build of Isku FX other than the fact that the gloss black surface is a giant fingerprint magnet. It’s also a shame that ROCCAT Talk doesn’t work unless you have the proper corresponding mouse.

I will say that using the ROCCAT software can be a bit daunting at first as there is a lot you can do with it and it’s a bit on the advanced side of things. That just means you’ll need to really get into the software and try out every part of it to really get the most of it. After a few hours, you should have no problems mastering the ins and outs of the Isku FX and soon you’ll become quite the power user.