What’s it like trying to plan a daring escape from some of the world’s most secure prisons? Near impossible. That’s what The Escapists has taught me in the time I’ve spent with the game. Mouldy Toof Studios and Team17 Digital’s prison break game puts you in the shoes of an inmate with just one goal in mind, escape. You accomplish this feat by trading for materials, completing favors, and crafting the tools needed to execute your plan, though all of that sounds much easier than it really is.

The Escapists starts off with a rather short tutorial that gets you acquainted with the controls, menus, and crafting system. The tutorial is a simplified prison escape plan and will have you breathing the sweet air of freedom in only a matter of minutes. When I first finished the tutorial, I thought I would be ready for my first prison escape. It seemed easy enough. All I would have to do is gather the right objects, craft the write tools, and I’d be a free man. How very wrong I was. The Escapists is bloody hard and that makes it a fantastic game.

Let’s first start with the graphics and get that out of the way. The Escapists isn’t going to win any graphics of the year awards. The visuals in this game are “retro” inspired and feature a style similar to that of old Zelda games on the NES. It’s a top down styles game though not entirely flat. You can actually climb up to a second level via the air conditioner pipes. The graphics look pretty decent for what the game is, but I won’t say they are unique anymore, not when so many other indie games are also doing the whole retro art thing. What I will say though is that the graphics don’t take away from the gameplay, they help focus your attention on it and make it central to your experience.

The experience is one that will take lots of time and patience. The Escapists is not a fast paced game, but a gruelingly long game filled with lots of repetitive tasks and observation. You will spend many in-game days going about your normal, mundane tasks with only a few precious in-game free time hours gathering all the materials and tools needed for your daring escape. This includes odd jobs, eating, working out, showering, and even sleeping. You’ll need to get to know your fellow inmates and see what kind of goods you can trade from them or steal. There’s a lot of planning and scheming involved with very little action other than the occasional prison brawl between inmates.

Those looking for an easy way out won’t find it here. The Escapists is tough and it wants you to suffer because isn’t that what prison is all about anyways? Suffering? It can be a frustrating game especially since it wants you to basically learn everything on your own. There is no manual for the crafting system. You have to combine items and craft items via trial and error as well as figure out what does what. Not only that, the guards are always on your butt so you’ll have to be careful of what you have on you and what you have stored in your bunk. Anything they deem as contraband can and will be taken from you if you’re caught with it. That also means several days of solitary confinement.

What The Escapists lacks in action, it makes up for with depth. There is a lot to discover in the game with so many different ways you can escape each prison. The game has tons of replay value if you stick with it and aren’t frustrated with the lack of instruction or how difficult it is. Some of you may probably never discover all the tools you can craft or even make it to the other prison maps, but that’s okay because The Escapists doesn’t really want you to escape. When you eventually do, it’s such a satisfying experience.

There’s no right way to escape, just figure out how to escape. 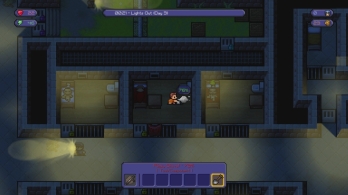