If you read the last post about my Dell XPS 13, then you know I’m doing a long term review on this laptop because I bought it and because why not. Unlike most laptop reviews however, I’m doing this one in parts because I’m reviewing this as I go and as I’m using it in my real life and for my real job. That means there might be one week where I’m praising the heck out of it and another week where I might be cursing it to death. This post though is the former. This one one is mainly about how the Dell XPS 13 looks and in my opinion, it’s one sexy laptop.

Starting with the aluminum shell, I bought the dell XPS 13 in the rose-gold color. Unlike Apple’s rose-gold color, this one is less pink and more of a dark gold. There is a hint of pink though, but I think this color looks so much better than the regular dark grey you can also get it in. The Dell logo on the lid is etched in and finished off in a glossy black and doesn’t light up or do anything special. 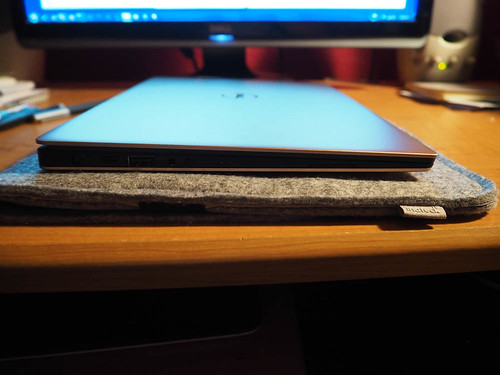 If you look at the Dell XPS 13 when it’s closed, it’s pretty darn thin. I’m not sure if it’s as thin as a Macbook Air is or the new Macbook Pros, but it’s thin and very easy to hold and carry around. Same goes for when it’s fully opened.

Speaking of which, it feels very solid when opened with some very strong hinges that stay in the position your put it at. It does not open to a full 180-degree angle. It does open pretty wide though, probably around 135-degrees or so.

The interior is not made of aluminum so it’s not an entirely made of one block like the Macbooks are. Instead, it has some carbon fiber looking soft touch material on the inside which looks pretty slick and has a really nice feeling to it. How it’ll hold up over time though remains to be seen, but for now, I really like how it looks.

The keyboard is backlit as you can see from the photos and can be adjusted to various strengths. You can even turn it off to conserve battery. I keep mine off for now just to squeeze every little bit from my battery. There is a fingerprint reader located at the bottom right under the keyboard. It’s not very noticeable and I like how it’s kinda hidden. 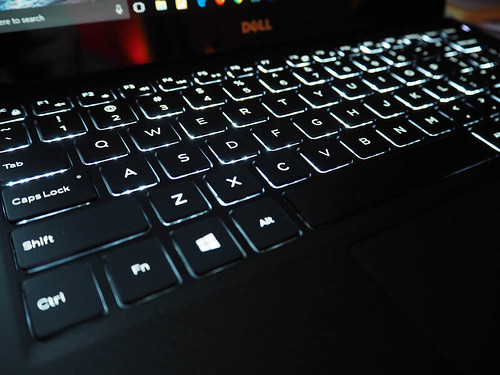 Of course when open, the thing you’ll probably notice the most is the gorgeous edge to edge screen which can be seen in my last post.

The onl;y negative that most people seem to mention on the Dell XPS 13 is the placement of the video-cam. It’s located on the bottom left of the screen which is a weird place for it. I haven’t used it yet however, so the placement hasn’t really bothered me much yet.

When it comes to ports, the Dell XPS 13 has a good amount of them. There are two USB-3 ports, one on each side of the laptop. There’s also a USB-C/Thunderport port, and audio jack, and an SD-card reader. It’s pretty much every port I need on the go

Well, that’s it for now. If there’s something you want to know about the XPS 13 that I didn’t mention in this post that you’d like to know about, feel free to leave a comment on the post and I’ll try to answer it. Thanks!