Earlier this month, indie publisher Versus Evil, and indie developer Tuatara Games released pixel-style shoot em up, Let Them Come, on the PlayStation 4. In the game, you play as Rock Gunar, an interstellar, cigar chewing mercenary gun for hire with alien blood on his hands. Employed by Infini Corp to destroy the alien hordes that threaten to wipe out human existence Rock Gunar is humanity’s only hope as he faces wave upon wave of aliens, of all different kinds. Quick target acquisition, a solid arsenal of weapons and sheer brute tactics are essential to making it to the next wave of alien attackers. The action is fast, chaotic and relentless and all presented in a gloriously over the top palette of 16 bit gore.

First up is the graphic style which is takes a decisively turn towards the 16-bit era. It’s very retro and looks like something you would have played back on the SEGA Genesis. Not only that, the game literally just takes place on just a few different screen. You aren’t traversing any levels. There are no platforming elements. Instead, it plays more like a tower defense style game where enemies come towards you, but the only thing defending you is you. What that means is that the game is actually really small in size but don’t let that fool you into thinking the game is light on fun, because it isn’t. 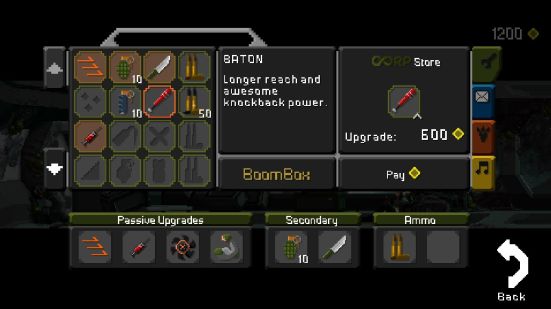 While yes it’s true that you’re basically just stationary the entire time, that just means you’re able to concentrate on the nitty-gritty, which is to kill swarms of aliens by any means necessary. As you play, you’re able to unlock and equip new weapons and power-ups. You do so by earning credits with each kill and then you can spend them after each time you die. There are a ton of different weapons to choose from which means a ton of different configurations you can go for. You’ll want to experiment with what works best for you based on your play style.

There’s a satisfaction that comes with just being able to hold down the trigger and trying to keep back waves and waves of alien monsters trying to kill you.  Not only that, I like how your progress gets saved so you don’t have to start from the beginning each time. For those who do like to start fresh, you can reset your progress. You can also play Rampage Challenge which gives you 2000 coins to spend on any upgrades you want and then see how well you do against the leaderboards. There’s also a Boss Challenege mode for each boss you beat for leaderboard rankings as well.

Audio in the game is also quite good, though you wouldn’t be able to tell in my video. That’s because Youtube will flag these as copyrighted, hence no music when I recorded these. You’ll want to keep it enabled though as the game feels so much better when there are tunes to listen to. The beats are fast paced and there’s a few soundtracks you can unlock and listen to as you progress.

Overall, very fun game to play. It can get a little repetitive at times but this is the type of game you can play in quick spurts when you just want to let off some steam and not have to over think things too much and just want to jump into the action.

Review code provided to us by the publisher for coverage purposes.