In my initial impressions, I was pretty impressed with the quality and design of the Sony Xperia XA2 Ultra. This is a device that could have been designed for a high end flagship, but was instead a mid range device. The all glass face flanked by an all metal border looks really slick and while the back is plastic, it is color matched and doesn’t look plastic.

The design elements I can really appreciate here is the door/tray that doesn’t require a special tool to get to the sim card and SD card. That makes it way easier to swap cards and since this is an unlocked device, international travelers should be happy about that.

I also really love that it has an actual camera shutter button and doesn’t just use the volume keys as a shortcut. That means that the shutter button is where it’s supposed to be on the right top side when holding it in landscape mode and the lens on the left like how a real point-and-shoot is. The Sony Xperia XA2 Ultra however doesn’t follow the current trend of two or more lenses on the back as it only has one, but it does have two selfie cameras up front. I take it that Sony thinks taking selfies is more important and I’ll agree with them there if you mainly take photos for social media.

Lastly, I like to placement of the fingerprint reader on the rear. It’s in a really good spot that makes it easy to reach with either index finger and I like that it’s not the actual sleep/wake button. That’s still on the side which is great because it means you don’t have to lift your phone off the table to view notifications on your lock screen. You can just tap the sleep/wake button on the side. 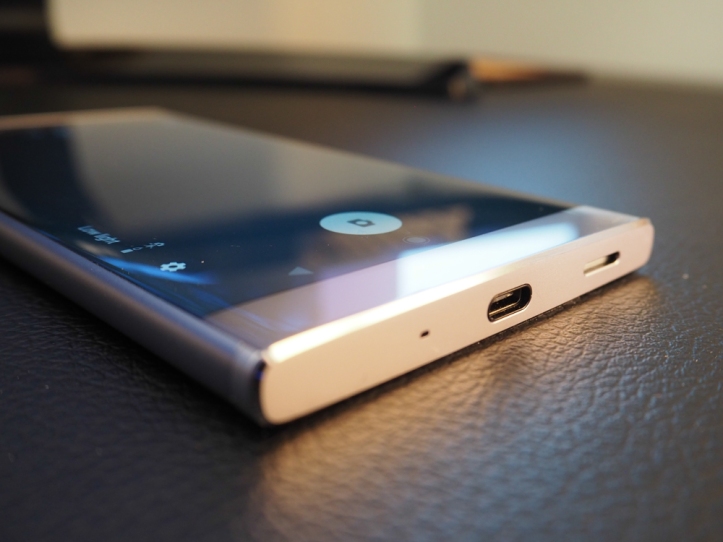 Now what do I not like about the Sony Xperia XA2 Ultra? Not much but there are some quirks. For starters, this is a huge phone so holding it can be a bit of a challenge if you have small hands. Also, while the bezel less screen on the sides might look cool, I found that my palms or fingers would constantly activate something on the screen accidentally. One handed mode too is pretty much out of the question even though there is a one handed mode. However, since the phone has pretty large bezels on the top and bottom, it was much easier holding the phone in landscape mode for things like watching movies of playing games.

Another slight negative is that this Xperia only has one speaker at the bottom. It’s easy to block it if you’re holding it a certain way both in landscape and portrait mode. You can however raise the volume on it pretty loud so that’s a plus and it also sounds really good too when cranked up.

I love the fact that Sony saw fit to give the Xperia XA2 Ultra the latest version of android. It runs Android 8.0 Oreo out of the box but it’s modified a bit with Sony’s own touches. Because it’s an unlocked device, you also get updates pretty quickly and don’t have to wait for carriers to approve updates. In fact, since I’ve had the device for only a week, I’ve already seen about 2 OTA updates for it.

Now I haven’t really had much experience yet with pure vanilla Android, but the Sony version of it isn’t too shabby. It’s quick, responsive, and seems like most of what people like about Android is there.

Sony does include some of their apps as opposed to using Google versions, such as their own Music, album, video, and calculator app and if you don’t like them, you can easily just go and download whatever you want to replace them. What I do like though is that since this is an unlocked device and not tied down to any carriers, there isn’t very much bloatware on it. It mainly just has AVG Protection installed and a couple Amazon apps.

Since it is a Sony device though, it’s also loaded with a PlayStation app, though sadly the Xperia XA2 Ultra is unable to use the Remote Play app which is reserved for their higher end devices. It would have been amazing being able to remote play PS4 games on such a large screen.

While the Sony Xperia XA2 Ultra doesn’t have the highest of specs, it’s still pretty darn decent and quick enough for most. It will run most apps pretty well except for the most demanding of games. For example, PUBG will not run in full graphics mode and will only play at “low” settings. It does however play Minecraft just fine.

I’m also quite pleased with the battery on this thing. It lasts a very long time with plenty of power to last a whole day and then some. With normal usage, you’ll be able to last about a day and a half to two days on a single charge. And when you do need to charge, if plugged into a quick charger will also charge up quickly. The only thing this phone is missing is wireless charging.

Audiophiles will be pleased to note that the Sony Xperia XA2 Ultra still has an audio jack. While it doesn’t have a built in DAC, it does have SmartAmp technology, ClearAudio+, Clear Bass, and Qualcomm aptX HD audio. If you’re a wireless user, it has Bluetooth 5 with aptX / A2DP.

I’m honestly not going to go into the camera much here as that will be another post that will be more in depth.  What I can say is that the dual selfie camera is kinda neat, though I’ve see the same effect on other devices with just a single lens. However, the Xperia XA2 Ultra has an actual front flash on it whereas most other phones do not.

On the rear, there’s only 1 camera. It’s a 23MP unit which is pretty high for a smartphone, but I would have liked to have a second camera on there, whether it be a zoom lens or a wide angle one. This is a mid-range phone so I can let that slide. The placement of the lens isn’t bad and because of the very convenient camera button, it’s possible to snap photos one handed. Again, this is probably my favorite feature about the Xperia XA2 Ultra and one that I really wish others would emulate.

The Sony Xperia XA2 Ultra is a rather interesting mid-range smartphone. It doesn’t look like a cheap phone with its all glass face and metal body and while the rear cover is plastic, this device just looks like a high-end device. Carrying it around would probably get you some looks not only because of how nice it looks but because of the overall size as well.

In terms of performance, it’s pretty peppy despite not having the fastest chip out there. The Snapdragon 630 does a very good job with normal every day usage and the only thing that will really make you notice sluggishness is if you play a really demanding game. Other wise, you’ll be speeding through all your social media apps, photo editing apps, etc.

While not the highest spec’d device I’ve used, I’ve had a blast using the Sony Xperia XA2 Ultra. Again, my favorite part about the device is the camera button and the large screen makes watching movies a joy. What I do not really like are the accidental taps my palm makes because of the bezel less sides, but it’s something I’ve learned to deal with by holding it a certain way. This isn’t a one handed device and learned to accept that.

Overall, it’s an impressive mid-range phone. The build quality is excellent and you’d be hard pressed to find anything else in this range that looks and feels as good as this. Plus since this is an unlocked device, you’re not tied down to any carrier. Updates also come really frequently and that’s always a plus when it comes to Android devices.