Around the same time as last year, we had the pleasure of checking out the Sony Xperia 1, which is the precursor to what I just received today from them. Sony was kind enough to loan us a Sony Xperia 1 II (Mark 2) for a few weeks so we’ll be thoroughly checking this out before we post a full review in the coming weeks. In the meantime, I thought I’d post some first impressions of the device based on some quick observations made after taking it out of the box.

Again, this is nowhere near a full review so what I say now may or may not change as time progresses. 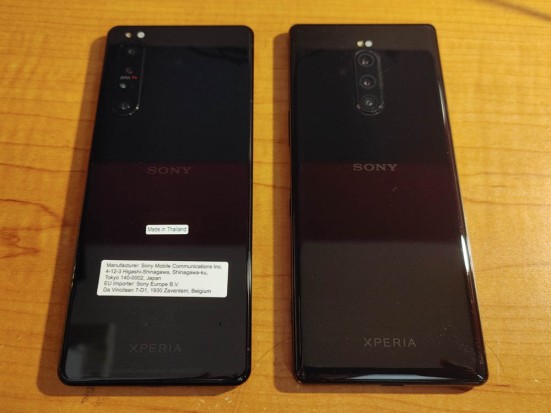 Upon first glance, the new Xperia 1 II isn’t really much different from last year’s phone. It has roughly the same overall dimensions and screen size. The edge around the phone has changed however and is now more squared off with chamfered edges. It gives the Xperia 1 II more of a slab like feeling though I think I much prefer last year’s curved edges more. This doesn’t seem to reduce the overall comfort of holding the phone and the Xperia 1 II is still easy to grip.

Button placement on the Xperia 1 II is also relatively similar to last year’s model except now, the power button has merged with the fingerprint reader. It’s still on the side, but now they’re one unit. I’m not sure if this makes it better or not, but we’ll know soon enough. For those who loved the separate camera button, you’ll be happy to note that this is still here, which is no surprise considering the Xperia 1 II is still being touted as a photography and video powerhouse.

While we’re on the topic of the display, it’s the same size as the previous model with pretty much the same little border on the chin and forehead. The display also isn’t quite edge-to-edge either, but I honestly don’t mind the tiny border as it keeps accidental palm taps from occurring.

On the back, the rear camera stack has moved over to the top left side and now features four lenses instead of three.

Lastly, the Xperia 1 II still features expandable storage which I still find as a huge selling point when looking at phones. Sure it has 256GB of built-in storage, but when you have a device that can record video at 4K, you’re going to want more storage.

Sony basically didn’t stray too far from the initial Xperia 1 design, which is good because I rather liked it. The tall and thin phone feels good in your hands and the ultra-wide display makes watching videos and browsing webpages more enjoyable.

Also, the phone doesn’t really feel any heavier or lighter than the previous model, even with the addition of an extra lens and audio jack. One last thing, the US model of the Xperia 1 II lacks 5G network connection which might be a big factor with how popular this phone ends up being.

Aside from that, the Xperia 1 II seems like a pretty solid device just on the first inspection. It’s an attractive design that doesn’t stray too far away from the norm. So is the Sony Xperia 1 II worth a buy? We’ll find out soon enough after we get more time with it.