Fighting games are a hugely popular genre and there is certainly no shortage of them. However, every now and then, something comes along that completely shakes up the genre with something truly unique and different. Fight Crab is just such a game. Fight Crab is an over-the-top, physics-based, 3D action battle game that combines giant crustaceans, wild weaponry, and intense claw-to-claw combat into one absurdly hilarious, must-play game. You are a crab – embark on a world tour of devastation, flipping over as many crabs as possible in a quest to be crowned lord of the crustaceans.

You probably never thought being a crab could be this much fun, but it is. This is a third-person fighting game where you take control of your crab from behind.

If you have Joy-Cons, you can swing your arms around to control your crab’s arms and claws, otherwise you have to use the sticks if you’re using a Switch Lite or in handheld mode. The controls are fairly loose but I think that adds to the crazy nature of the game as you watch your crab’s arms flail around wildly. Your pincers can also be controlled to either close or open, allowing you to block, grab opponents, or pick up weapons on the ground. Lastly, you can also move your crab around, but in an awkward way in which crabs move.

While the game is super fun, there are a few annoyances that can frustrate. First up, the camera isn’t exactly great. Sometimes the camera will move away from your opponent which makes it difficult sometimes to lock on. Also, your crab’s movements can be sluggish and laggy. I think this is the nature of the game though as it makes things more hectic and inaccurate.

Despite this, Fight Crab is still incredibly fun. Aside from gameplay, the presentation of the game is just really well done. The art and graphics are very good and each type of crustacean looks pretty darn accurate. There’s a good variety of crabs you can unlock and choose from along with a large variety of weapons. Most of it is pretty realistic and adds to the absurdity of the game.

The audio in the game is also very good, from the sound effects to the amazing Japanese soundtrack. All this just makes the game that much better.

Those who want to play with friends will be happy to note that there is multiplayer, both local and online. There’s a versus mode as well as a co-op mode. 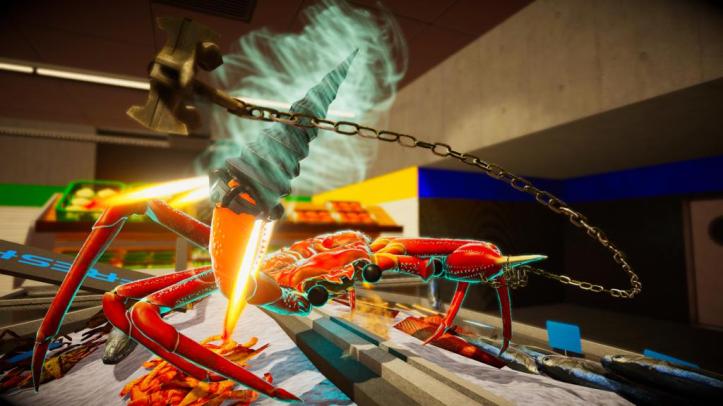 Basically, the unusualness of Fight Crab is what makes it so great. Never before have shellfish been used for a fighting game and interestingly enough, it’s surprisingly good. Not only do you use different types of crustaceans to fight, but they can also use a crazy amount of wacky weapons that you know crabs can’t really use. Nevermind the wonky controls and inaccuracies, as most of that I believe is intentional. Let’s just say it’s frustratingly fun. It’s just so over the top when you see a crab holding a samurai sword or even a pistol that you can’t help but laugh, which makes the experience more enjoyable.

I love to bring you guys the latest news and reviews whether it be apps or gadgets, but hosting and maintaining a website can be expensive. If you would like to purchase any of the items mentioned on the site, please do so by clicking our links to Amazon first (when available) and then purchasing the items. This way, we get a small portion of the sale and this helps me run the website.