I don’t play Nintendo DS games all that often really but my son does. Usually DS games don’t interest me too much as there just seems to be so many mediocre titles out there that just don’t seem all that exciting to play. However, titles coming from Nintendo are usually really good and demand attention even from those who don’t play that often. That is the case with their newest title, Mario vs Donkey Kong: Mini-Land Mayhem. I’ve played some of the previous Mario vs Donkey Kong games and found them quite enjoyable so I was eager to see if this game was as good, plus I wanted to introduce my son to a new Mario game as that is really one of the main reasons for owning any Nintendo device.

Mario and Pauline are celebrating the grand opening of Mario’s new outdoor theme park. To celebrate, the first 100 visitors receive a free Mini-Pauline toy. Donkey Kong, being a huge fan of Pauline attends the grand opening but he arrives to late and is the 101st visitor and does not receive a toy. In a fit of rage, Donkey Kong kidnaps the real Pauline and carries her off into the park. With the help of his Mini-Marios, Mario must now do what Mario does best and rescue her.

Upon bringing Mario vs Donkey Kong: Mini-land Mayhem home, I was immediately intercepted by my son and relinquished of the game. What that means is that he would have first crack at the game. I wasn’t about to say no as how do you say no to a 4 year old when they make THAT face? The fact that the game has Mario in it automatically made it a game that my son had to play. He didn’t know who Donkey Kong was however so I tried my best to explain to him who he was.

The first thing we noticed about Mario vs Donkey Kong, Mini-land Mayhem was the intro animation. My son was mesmerized by it and it really drew him into the game. He has never seen Donkey Kong before or the Mini-Marios so it was quite a treat for him. I had to explain to him however that Donkey Kong isn’t really a “bad guy” but was just having a bad day. He also absolutely loves the Mini-Marios. (Note to Nintendo, please make these into actual toys if they don’t already exist.) 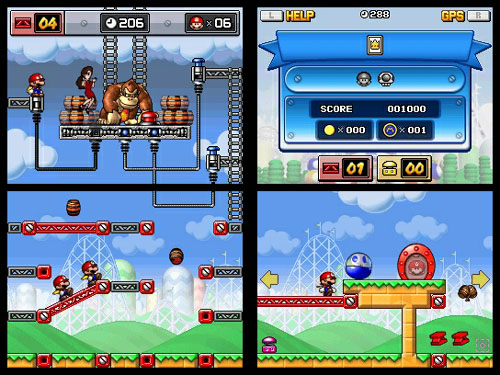 Gamplay wise, Mario vs Donkey Kong: Mini-land Mayhem plays like the previous games in the series. The game starts off easy but gradually gets more and more difficult as the puzzles get harder. My son was able to complete the first group of levels in the game on his own without any help, but upon reaching the second group, he had to ask for my help to complete those and all subsequent levels. I didn’t mind at all as this allowed me to finally play the game while he watched from the side. In fact, I found this to be a great bonding experience since we actually got to play this game together. He would do some levels with me looking on and he would do the same as I played. Every time he would pass a level, I would tell him what a great job he did and it really made the game that much more enjoyable for him. That alone makes Mario vs Donkey Kong: Mini-land Mayhem a must buy in my book.

Since then, he’s been getting better and better at it and rarely asks for my help anymore, except for the really difficult levels. It’s a game that really enhances your creative thinking and problem solving skills without it actually seeming like it’s teaching you anything at all. It’s fun and intuitive as well as suitable for the entire family. The fact that it’s all touch enabled with the stylus makes it simple for almost anyone to just pick up the game and play. Whenever the game introduces a new element to the game, they always show a quick in-game explanation of what it does and how to use it. This is something that Nintendo has always been good at and that is explaining how to play their games properly.

If you buy any DS game this year, I highly recommend Mario vs Donkey Kong: Mini-land Mayhem. It has tremendous replay value and the familiar characters of Mario and Donkey Kong will keep you coming back for more. The game is also very fun and offers enough challenges for both children and adults alike.