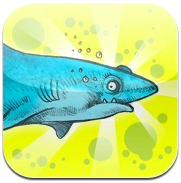 This app is a bit different from some of the other games we’ve been reviewing on The Gamer With Kids. Surf Creatures, by world champion pro surfer Shaun Tomson is a storybook app for children. It is not a game and instead is an audio ebook of sorts with some unique functions not normally found in an ebook. It in essence is an app as it is a standalone application so it does not require the use of an ebook reader like iBooks or the Kindle app.

Like I said above, Surf Creatures is a storybook app. Whether you like the rhymes featured within it are purely of your own opinion but in my opinion, I quite enjoyed them and so did my son. The illustrations are very good and its an overall entertaining app. The unique feature that I alluded to above is called the “Storytalk” feature. Basically what this does is it allows you to record your own voice for narration so that the stories will be more personal to your child. They’ll be able to hear your voice reading the stories to them even if you are not around. It’s a great feature and one that I hope to see in future apps of this type.

Surf Creatures is a different kind of app that I think children will really enjoy especially if they can read along while listening to your own voice narrating each rhyme. For adults, this is a great way to get your children to learn about a few of the different sea creatures that the ocean has to offer while making them more aware of goes on beneath the surface. Shaun Tomson really has done an excellent thing here and I hope to see more of this kind of app in the future.

Surf Creatures is available now in the App Store for $3.99. It is compatible with all devices with iOS 3.2 and higher.

Beautifully illustrated catchy and crazy rhymes for kids about 26 friendly and fierce creatures that live under the surfboard of world champion surfer Shaun Tomson.

The very first and only application of its kind to feature Storytalk™, enabling up to four people to record their own voices so the whole family can rhyme about the cool creatures that live in the surf zone. This fun and easy-to-use app for the iPhone and iPad was written and created by surf legend and environmentalist Shaun Tomson!

While learning all about elephant seals, killer whales, and tiger sharks (oh my!), kids are sure to be delighted by the entertaining and educational rhymes, beautifully illustrated graphics, and realistic sound effects.

Three ways to enjoy Surf Creatures
– “Play” – listen as Tomson himself reads the rhymes, with words highlighted as they are spoken.
– “Record my own voice” – use Storytalk™ to record your own narration. Up to four users can record and save their own voices!
– “Play my own voice” – read along with your own prerecorded tracks.

Surf Creatures’ Features
– 26 rhymes about the fierce and friendly creatures that live in the surf zone—all written by world champion surfer Shaun Tomson!
– Over 80 pages of stunning, hand-drawn images of the aquatic inhabitants.
– Realistic sound effects and cheerful music to enhance the user’s audio experience.
– Helps to improve reading and listening comprehension skills.
– Promotes reading in young children as words are highlighted when spoken.
– Teaches children all about the creatures that live in the surf zone, making them more environmentally-aware.
– Mom, Dad, Grandpa and Grandma can all record their own voices to be able to read to the child even when they are not present.

About Shaun Tomson
Shaun Tomson has been listed as one of the 25 most influential surfers of the century and as one of the 16 greatest surfers of all time. He is the author of the best-selling book Surfer’s Code– 12 Simple Lessons for Riding Through Life and the producer of the award-winning documentary film Bustin’ Down the Door.
Tomson is a businessman and environmentalist who resides in Santa Barbara, California, with his wife Carla and young son Luke. He is an inspirational speaker for corporations, schools and universities and is working on new book, film and apparel projects. He is a board member and ambassador for Surfrider Foundation, the world’s largest environmental group dedicated to protecting the world’s ocean, waves and beaches.
He still spends time searching for the perfect wave, while doing his best to avoid Tiger Sharks and Zambezis.