Hogtide is a brand new game from developer 5th World Media. You may remember 5th World’s previous game, Bouncer Boot Out which we reviewed a few months ago here. If you had a chance to play that game, then you know how quirky the theme was but how solid the gameplay was as well. 5th World is back with their latest game, Hogtide and it lives up to the quirkiness the 5th World is known for.

In Hogtide, you play an outlaw who must outrun the law on his trusty hog. That’s right. You ride a hog instead of a horse. Hogtide is simple enough to play. Gameplay is of the endless running type where you avoid obstacles. Unlike some other endless running games however, the point of the game isn’t really to see how far you can get but instead, how high you can raise the bounty amount of your wanted level. You increase your bounty with distance traveled, but you also gain bounty bonuses by collecting wenches and drinking moonshine. This really helps to increase your score. Another area that differs is that you need to “fuel” your hog in order to keep running. You do this by collecting beans along the way. If you don’t, you’re hog will run out of fuel and your game will end.

Hogtide has two control schemes you can use. You can either tap up above or below your character to make him move up or down to switch lanes or you can swipe the screen up or down to do the same. Very simple to learn and the controls are quite responsive which is good because you’ll really need to be on your toes to avoid obstacles and collect fuel.

Graphically, Hogtide is a treat. It features 5th World’s unique artistic style and has many similarities to that of their previous game, Bouncer Boot Out. The art has a very polished cartoon feel to it and it really does show that these guys take the time to develop their characters and backdrops. Even the menu screen looks good. I also like the fact that they took the time to include an illustrated help menu that teaches you the basics of the game.

Audio wise, the game is loaded with sound effects. There is a sound for almost every action you do as well as every item you collect or obstacle you run into. The background music has a very western, fast paced theme to it that really give you a sense of speed and urgency. It’s very appropriate for the type of game that it is.

There aren’t really any negatives about the game I can think of unless you were looking for more features or gameplay modes in which case, this isn’t the game for you. Hogtide only has 1 game mode but that’s usually the case with these “endless” type games. I found the game to be quite enjoyable and challenging and would play it multiple times to try and beat my previous score.

Hogtide is a fun casual game that you can play whenever you have free time here and there. It’s the type of game where you don’t need to commit a lot of time to play in order to enjoy it. There aren’t any complex controls to learn or any lengthy leveling up of characters. You just pick it up and play. The theme itself really isn’t meant for children since it is a bit adult in nature but it’s not hard to spin your own tale of what is going on in the game to make it a bit more children friendly if need be. Just substitute “wenches” for “damsels in distress” and “moonshine” for “root beer or cola.”

Hogtide is available now in the App Store for $0.99. It is compatible with iPhone, iPod touch, and iPad. Requires iOS 3.0 or later. 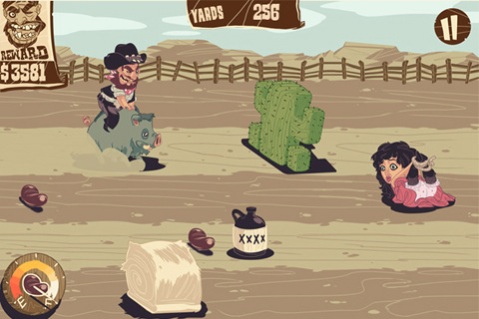 Keep ahead of the oncoming HogTide!

Hogtide sees the player mounted on the back of a pig riding to escaped from the authorities. The player must collect beans to keep his hungry mount from running out of fuel. As they are already wanted by the law, the player can raise their bounty by collecting moonshine to run it over the boarder, and by freeing the beautiful women that have been left for dead in the unrelenting desert sands. All the while, the oncoming Hogtide will be chasing the player, trying to catch them and ram them headlong into anything that will stop them in their tracks.

•Tap or Swipe between lanes in order to collect beans; the fuel your hog needs to keep going!
•Increase the bounty against you by rescuing distressed damsels and collecting moonshine!
•Get as far as you can before the law catches up with you!
•OpenFeint enabled!

PLEASE NOTE: This game is currently optimized for 3G devices and above, and may perform poorly on 2nd Generation devices.