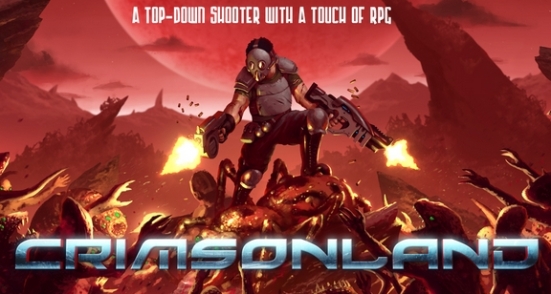 If there’s one thing the PS Vita is not short on, it’s indie games. There are so many quality indie games out now for it that there should be no reason why you’d have nothing to play. One of the more active indie developers on PSN is that of 10tons. King Oddball and Sparkle 2 were two of their previous games that we had looked at. Another titles they had come out with recently was that of Crimsonland. We had taken a look at Crimsonland when it originally came out on the PS4 a month ago an noted that remote play on the PS Vita wasn’t very good. Well, not there is a native PS Vita version available and it’s what I am taking a look at today. If you already have the PS4 version, you can download the PS vita version for free thanks to cross-buy option.

Crimsonland is a top down, twin stick shooter featuring intense action and over the top mayhem. Crimsonland was originally released in 2003 on the PC. 10tons decided to re-release it on the PS4 as a remastered edition featuring updated music, graphics, and more. However, many fans asked for a PS Vita port, and due to overwhelming fan support, the game is finally here for PS Vita. The game is incredibly easy to get into as you mainly only use the left stick to move, the right stick to aim, and the right trigger shoot. Your goal mainly is to shoot all the zombies and spiders until there are no more and progress to the next level. 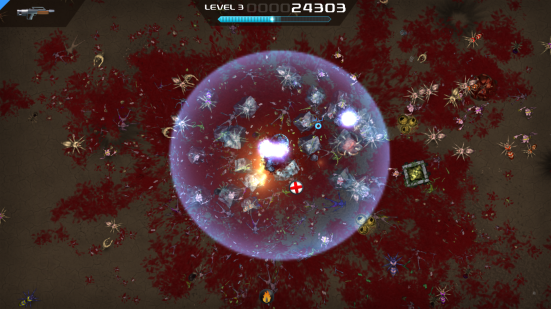 The PS Vita version of the game is slightly different as you’re able to aim and shoot using the touchscreen if you want. All you have to do is tap anywhere on the screen and you will be able to shoot in that direction. It does make shooting a little bit more accurate but I prefer using the more traditional controls.

Along the way, you’ll be able to unlock new weapons (30 in total) and new perks that will give you a distinct combat advantage. I suggest playing through the quest mode first so you can progress through the six chapters and unlock everything. After quest mode, try your hand at the five survival modes – Survival, Rush, Blitz, Weapon Picker, and Nukefism. Most of these modes need to be unlocked in Quest mode anyways in order to play them.

Graphically, Crimsonland looks exactly like its PS4 brother, just smaller.  It’s a throwback to a much older game and it probably remains faithful to the original source. In my opinion though, the game looks much better on the smaller PS Vita screen.  To me, the game just seems to be more suitable as a handheld portable game. 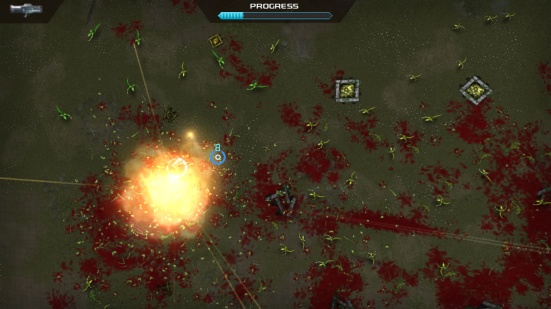 The arena itself is pretty barren with not much on it and it only gets filled when there is blood splattered about everywhere. The character models look pretty good though, considering you only see them from the top down, but they look good. The special effects and animations look good to, like all the explosions and weapon effects, I just wish the backdrop wasn’t as barren as it is. Crimsonland on PS Vita is still pushing a ton of baddies on the screen at once without a single hiccup. The game runs super smooth even with what seems like hundreds of bad guys at once on the screen.

There is one thing that the PS Vita version of the game lacks that the PS4 version has and that is multiplayer. You can’t play multiplayer on the Vita and there isn’t a way of playing it ad-hoc either.

Crimsonland was good on the PS4, but I think its even better on the PS Vita. Crimsonland is very fun in portable form. There’s just something satisfying about shooting up an almost endless wave of zombies and spiders. It’s a solid game with easy to learn controls, familiar gameplay, and challenging levels. The only thing it’s missing is that of a multiplayer mode.

As for whether or not this is suitable for children. It’s a toss up. It’s not as family friendly as their previous two games, but the violence here is so over the top and insane that it wouldn’t bother me if my kids played it. Besides, this deals with zombies and spiders. Zombies don’t really exist (yet) and spiders almost everyone dislikes anyways. I don’t have a problem letting my eight year old play it, but I advise you play the game yourself first and decide on your own.