Neon Chrome is a brutal, twin stick shooter with rogue-like elements. What that means is that while this game might resemble your classic, top-down shooter, you’re only given one life to make it 29-levels to the end of the game. While that might sound incredibly difficult to pull off, let me just say, THAT IT IS! That’s doesn’t mean it’s impossible though and the developers, 10tons has put into place something that makes getting to the end a bit easier to manage for casual player but still challenging enough for the most hardcore. I’ll speak more about this later.

Neon Chrome is a building. A building owned by Neon Corp and run by the Overseer. It is home to a million people, all of which must trust the Overseer with their safety and future. You however have very little trust in him and have been marked for termination. Instead of just laying down awaiting removal, you instead decide to rise up against the Overseer and take him and his forces head on. 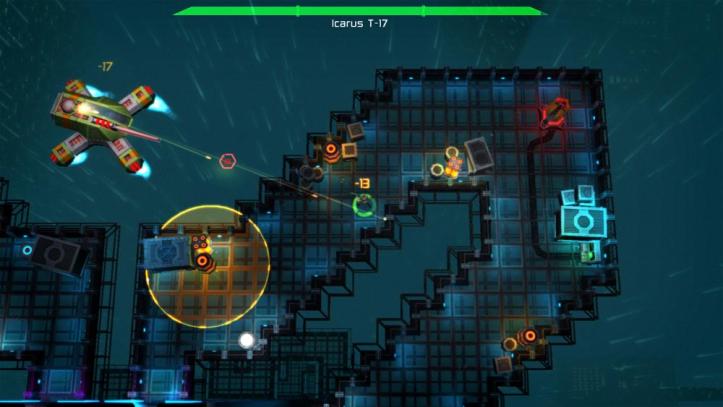 Neon Chrome is a good looking game. It’s probably one of 10tons best looking games they’ve ever made. The color palette is fairly dark but it’s broken up by lots of neon colored accents, mainly from all the lighting and weapons fire. It gives the game a unique look that really accentuates the tone of the game.

Part of what makes this game incredibly fun too is the music. It adds a lot to the ambiance of the game and really helps to keep the game moving along at a steady and fast pace. It never gets in the way of the gameplay.

You see, the 29-levels are broken up into sections, each with an end boss at the end. If you defeat this end boss, you’re given the option of starting the game after that end boss instead of all the way back at the start. This makes the game a lot easier for casual players because it means your real goal is to just beat the end boss of each section so if you die, you can start from a later check point. If you’re a hardcore player, you can choose to start from the very beginning. The choice is yours.

Another area where the game tries to help casual players out is in the upgrade system. Each time you play, you gain credits. The longer you live for and farther into the game you get, the more credits you earn. These credits are used for leveling up your base character stats as well as being able to buy specific loadouts before a game starts. When you die in the game, you don’t lose these credits. Instead, you’ll be able to use them during the in-between phase. What that means is that each time you play, it matters. Whether you make it through one level or ten levels, you’ll gain credits to spend on upgrades to make you stronger. I highly suggest using those credits on leveling up your stats and not on specific weapon loadouts.

Multiplayer is also a big part of Neon Chrome. While you can play the game entirely as a solo player, multiplayer can make things a bit easier. My experience here is mainly all local multiplayer with my son. What makes this experience quite good is that there is no split screen. You share the entire screen with your teammate so you have to coordinate where you want to go. It doesn’t seem like the game spawns more enemies than it does when you play solo and while the game is still a challenge, at least you got more firepower aimed at them now. Also, if one of you dies, if the other makes it to an exit point, you’ll spawn right back in the next area. So in essence, you both will get multiple lives as long as one of you makes it to the end.

Neon Chrome is an incredibly well done, twin stick shooter. It’s very accessible to players despite its rogue-like elements and even though it can be really challenging, it’s not a difficult game to pick up. The procedurally generated levels mean that each time you play, you won’t really be playing the same game twice. Though you’ll see many of the same elements, they are rearranged along with the enemies to keep things fresh. The only thing that doesn’t change are the boss levels.

My absolute favorite thing about the game though is local multiplayer. I’m able to play the game on the same machine with my son and it’s a blast. There aren’t many games these days that allow for local multiplayer so when there is one, I’ll usually try to check it out with him.

With that said, check out Neon Chrome. Again, incredibly fun both solo and with partners, but definitely more fun and slightly easier with partners.