Competitive multiplayer games are a huge thing right now especially with games like Fortnite and PUPG. Fortnite especially and while we all wait for the eventual release of it on Android, there are other games out there that can satisfy your PvP cravings. One such game is Game Insight’s Guns of Boom. While it’s a game that’s been out for a while now, it’s still a very good multiplayer FPS for those who want that competitive PvP action on their Android devices.

Guns of Boom is a purely multiplayer experience so those wanting to play a solo FPS game, this ain’t it. You’ll be immediately thrown into matches with other players without much regard for what rank you are or what weapons you’ve upgraded. That means you will often get matched up with higher ranked players with better weapons. If you take the time to figure out the intricacies of the game though, it is possible to come out on top regardless of what you have.

Graphically, the game looks pretty good. It has a bit of a cartoony look to it, similar to that of Fortnite and everything is pretty much all bright and colorful and a bit exaggerated. It works for this game though and while it’s not hyper-realistic, I think it adds to the fun and makes it a bit more light-hearted.

Control wise, I do like what they did here. It’s got your standard virtual joystick for movement as well as one for aiming. There however is no separate button for shooting and instead, the game will auto-shoot for you when your targeting reticle is over an enemy. That makes things a lot easier as you wont have to take your thumb off the aiming controls to fire. There is one negative to the controls though and that’s the fact that I can’t use a physical controller with this game. I’ve tried with a Steelseries and a PS4 controller and it just won’t work. Aside from that, it’s still pretty easy to play and get into, although aiming can be a bit twitchy depending on the textrure of your screen. The smoother it is, the easier it’ll be.

Like most free-to-play games, there’s in-game currency to be earned that you can use to unlock new weapons, skins, and costumes. Skin and costumes however require a lot of randomness since those are dependent on what you get from loot crates. Those who have played a lot of multiplayer PvP style game will be quite familiar with the randomness of loot crates. Just know that none of this affects gameplay.

Overall, Guns of Boom is a pretty fun game for those who want that multiplayer kick when out and about. It’s not quite as hardcore as playing on a console or PC, but it’s pretty good for what it is. The controls make it surprisingly easy to pick up and play. So if you’re looking for a good multiplayer game to tide you over until Fornite on Android comes out, check out Guns of Boom. 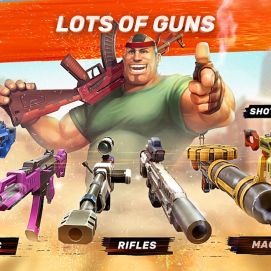 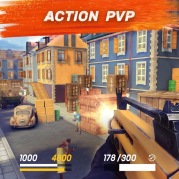 • Easy and intuitive controls: get a hang of the game from the get-go and start climbing up the ranks!
• Vivid graphics and support for older devices: stunning visuals will keep you glued to the screen, while the hardware requirements remain very moderate.
• Engaging PvP battles: enjoy team-based fun across numerous maps and game modes. The adrenaline-filled action never stops in GoB!
• Character customization: create a unique hero by using a combination of various perks and equipment skills, and find the perfect look with hundreds of cosmetic items. Creating a flexible build for your play style is as easy as ever.
• Regular updates and events: with constant content additions, new features, and colorful themed events, you’ll never be bored. This game just keeps on giving!
• Pro Play Mode: eSports events with players from globally acclaimed teams. Can a mobile FPS be truly competitive? You bet!

Guns of Boom is a competitive multiplayer FPS with awesome 3D graphics and gripping gameplay. It’s so simple that your cat could learn the controls, but the skill-cap is high enough to spark the interest of competitive eSports players who’re used to extremely challenging and clutch tournament-style battles. Engage in online PvP battles on a variety of maps, utilizing different cunning tactics. Get the ultimate FPS experience with fast-paced matches that take less than 5 minutes on average. The game is on!